< Zimbabwe’s Vaccine Requirements Add Difficulties to the Poor
Update Required To play the media you will need to either update your browser to a recent version or update your Flash plugin.
By Gregory Stachel
09 October 2021


Zimbabwe is requiring its 500,000 government employees and several other groups to get vaccinated against COVID-19.

This sets the southern African nation apart from nearly every other in Africa. Many African countries are having difficulties in getting enough shots.

Zimbabwe said it has more than enough vaccines. The country bought most of them from China. The government says the difficulty has been the people's lack of trust in the vaccine. This is partly because they distrust the government. But Zimbabwe's plan is raising worrying questions about the rights of its citizens.

Researchers at Johns Hopkins University record information about coronavirus infections around the world. They found that Zimbabwe has reported about 130,000 virus cases and about 4,600 deaths. Those numbers are likely to be too low. However, the virus has not affected Zimbabwe as strongly as other countries. This might add to the lack of urgency Zimbabweans have in getting vaccinated. 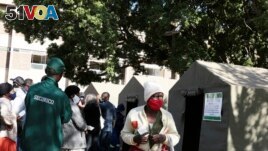 A woman holds her vaccination card after getting a second shot at a government hospital in Harare, Zimbabwe on Monday, Sept, 13, 2021. (AP Photo/Tsvangirayi Mukwazhi)

Critics say that Zimbabwe's government is not able to administer the vaccination effort. Centers sometimes run out of the injections. And poor urban and rural areas have not received shots in recent months.

The critics also say it is cruel to put at risk the livelihoods of people who are some of the world's most vulnerable.

Dewa Mavhinga is the southern Africa director for Human Rights Watch. He said the government of Zimbabwe should first make sure that vaccines are equally available to all people before requiring them.

Mavingha said distrust in the vaccine should be dealt with "in a way that builds public trust and confidence in the vaccines without the use of force."

Rights activists describe Zimbabwe's government as authoritarian. It appears ready to continue enforcing its vaccine rules. The government already requires vaccines at religious places and has suggested extending the enforcement to public buses. Public buses are very important to the country's poor. Markets, which millions need to buy or sell goods, might also be restricted.

Those measures would effectively make the vaccine a requirement for nearly all Zimbabwean adults. This includes the two-thirds of the working population who are unlikely to experience enforcement from their employers.

Some Zimbabweans have waited hours only to be told their vaccination center was closing because of a lack of supplies or employees. People who can receive the second shot have also been turned away from centers which give preference to those seeking the first shot. However, new supplies of the vaccine have arrived recently and lines appear to be getting shorter.

Around 15 percent of Zimbabwe's 15 million people are fully vaccinated. This is above the four percent for all Africans but far from the government's goal of 60 percent. The country has received 12 million shots. They are mostly the Chinese Sinopharm and Sinovac vaccines, which require two shots. Johns Hopkins University has found that just over 5 million have been administered.

Debates on the vaccine

Peter Mutasa is the president of Zimbabwe's largest labor organization. He said the government is to blame for not vaccinating enough people.

"Workers have been trying to get vaccinated," he said.

Mutasa's organization, the Zimbabwe Congress of Trade Unions, is fighting enforcements for workers in court. It is one of the only organizations in the country to be publicly opposed to them. Other groups appear unwilling to speak out for fear of being considered anti-vaccine.

Mutasa is not against the shots. He said connecting them to employment means jobs will be lost "unnecessarily." The economy collapsed just over 10 years ago with high levels of inflation. Nearly half of Zimbabwe's population lives on less than $1.90 a day.

Dr. Agnes Mahomva is the chief organizer of the government's COVID-19 efforts. She defends the requirements, saying they are aimed at "protecting everyone." She argues that they remain voluntary in a way.

"If one doesn't want to be vaccinated, no one is going to come to their house to grab them and vaccinate them," she said.

But Mutasa noted that workers who truly need the money have "no way to say no."

Acholo Jani repairs machines in Zimbabwe. He cannot go back to work until he is fully vaccinated. After waiting at first, he decided to get the shots.

Until he is fully vaccinated, he is selling whatever he can on the streets to make some money while he does not receive his usual pay.

"How are you going to survive without a vaccination card in this country?" he asked.

Farai Mutsaka reported this story for The Associated Press. Gregory Stachel adapted it for VOA Learning English. Mario Ritter, Jr. was the editor.

confidence –n. a feeling or belief that someone or something is good or has the ability to succeed at something

preference – n. an advantage that is given to some people or things and not to others

grab – v. to quickly take and hold (someone or something) with your hand or arms