< Young Dubai DJ Gains Fame
Update Required To play the media you will need to either update your browser to a recent version or update your Flash plugin.
By John Russell
14 May 2021


Michelle Rasul, age 9, is one of the world's top DJs or disc jockeys - people who play recorded music on the radio or at celebrations or parties.

Rasul even competed in this year's international championship and placed 14th out of 85 DJ stars from around the world.

At her home in Dubai, the rising star from Azerbaijan described how she got her start.

"I looked at my dad while he was practicing DJ-ing and I saw him and was like, ‘Wow, is he doing magic or something? He's a real magician...'" Michelle told The Associated Press recently.

She added, "When I turned 5 on my birthday, I told him, ‘Dad, I want to be a world famous DJ. I'm going to start practicing.'"

Michelle smiled and added: "And the rest is history." 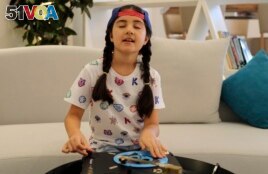 Michelle Rasul enjoys scratching her turntable in the lobby of her apartment building in Dubai, United Arab Emirates, Sunday, May 9, 2021. Rasul, a 9-year-old girl from Azerbaijan who lives in Dubai, is scratching her way to the top as a DJ after competing in the DMC World DJ Championship. (AP Photo/Kamran Jebreili)

Michelle is the youngest-ever person in the DMC World DJ Championship. She placed 14th out of 85 DJ stars from around the world in the "Portablist" category this year, the portable scratch competition. The 2021 competition was held online due to the coronavirus crisis.

Although she did not go to the next round this time, she is determined to beat her father, Vagif "DJ Shock" Rasulov in next year's competition.

Rasulov came in 9th place this year and taught Michelle how to DJ.

Turntables are the part of a record player that turns the record. Turntabling - taking a record, putting the needle down and sliding it back and forth with one's fingertips - came onto the music scene in the late 1970s among hip hop artists.

Turntabling can look like a simple act, but it is an art form. It involves sound mixing and methods like quick, rhythmic scratching or "crabs," or rubbing the record under the needle.

From the moment her parents gave her a mini DJ starter set, they recognized her strong abilities.

"She just catches things so fast," she said. "I realized that she's a star, that she's really talented."

When children her age were listening to children's music, or as she put it, "‘Baby Shark' stuff or ABC songs," Michelle said she listened to rap artists like Tupac Shakur, Chuck D, Jay-Z, the Notorious B.I.G. and Michael Jackson, who remains her favorite.

Her parents started putting video of her DJing online, and Michelle's popularity grew. Her Instagram page has around 110,000 followers. Online messages from DJs ages 6 to 65 came in from around the world, she said.

Before the pandemic put big gatherings on hold, Michelle performed regularly at weddings, parties and musical events across the city.

While the rest of the world pays attention to her accomplishments as a DJ star, Michelle is busy attending online school, reading and hanging out with friends and dogs at her neighborhood park. But her heart is always in turntabling.

"I can't imagine my life without music," she said.

Malak Harb reported on this story for the Associated Press. John Russell adapted it for Learning English. Susan Shand was the editor.

practice – v. to do something again and again in order to become better at it

magic – n. tricks that seem to be impossible and that are done by a performer to entertain people

category – n. a group of people or things that are similar in some way

portable – adj. easy to carry or move around

scratch – v. to rub a surface or object with something sharp or rough in a way that produces a harsh sound

rhythmic -- adj. having a regular repeated pattern of sounds or movements

needle – n. a very small piece of metal that touches a record and produces sound when the record is played

talented -- adj. having a special ability to do something well : having talent