< Young Africans Struggle with Jobs, Education During Pandemic
Update Required To play the media you will need to either update your browser to a recent version or update your Flash plugin.
By Gregory Stachel
18 September 2021


Across Africa, many young people are battling an economic downturn caused by COVID-19. The second yearly African Youth Survey found people aged 18-24 in 15 countries are losing jobs and changing their education goals.

Early findings of the study show the pandemic increased the already-high level of unemployment among the group.

Nearly 20 percent of the 4,500 people in the study said they became unemployed because of the pandemic. And 37 percent were forced to stop their education permanently or temporarily. Eight percent saw their pay reduced and 18 percent had to move back home. Finally, ten percent said they had to care for family members.

The study was carried out by the Ichikowitz Family Foundation based in Johannesburg, South Africa. The Founder, Ivor Ichikowitz, runs Paramount Group, a company that works with space, security, and military organizations.

Of the 1.3 billion people in Africa's 54 countries, an estimated 250 million are aged 18-24. The study was carried out in large cities and trading centers in Angola, Congo, the Republic of Congo, Ethiopia, Gabon, Ghana, Kenya, Malawi, Mozambique, Nigeria, Rwanda, South Africa, Sudan, Uganda, and Zambia. 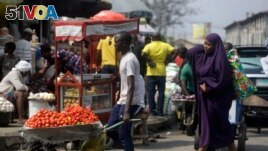 FILE - In this Dec. 24, 2020, file photo, people walk in a market in Lagos, Nigeria. Nearly 20 percent of the 4,500 of the people in the study of young people in 15 African countries said they became unemployed because of the pandemic. Some of them turn to selling farm produce or other goods on the street. (AP Photo/Sunday Alamba, File)

The researchers were from PSB Insights, an international research company. They were citizens of each country and went door-to-door for detailed, face-to-face interviews.

The people interviewed said the pandemic causes great, difficult changes to their schooling, showing the need for more computers and internet access in Africa for online education.

Bola Badejo, who is 29, says her work earnings at a broadcast station where she worked in Abuja, Nigeria, were cut in half. She said she could not make it on her pay, $146 a month.

"I fell into depression because the whole thing was really sad. I felt I had nowhere to go," Badejo said.

After seven months without a job, she started a home cleaning business, and that has increased her hope, she said.

Badejo is one of many who have found different ways to survive financially.

The study found that in 2020 about 40 percent of those who were asked had hope for the future. The pandemic changed that number, lowering it to 31 percent.

Uganda has had two shutdowns since April 2020, the second was eased in July. But businesses where people are in close contact, like bars and gyms, remained closed by presidential order. This leaves many young people without work.

Ronald Maathe is 25 years old and a janitor at a gym outside Uganda's capital of Kampala. He shook his head sadly when saying that his monthly earnings is now what equals $43. It is half of what he used to make before the pandemic.

He said, "After I pay the rent, I am left with almost nothing." He commented the half pay, "... doesn't do anything."

His face lights up when describing how he makes extra money by selling a fruit called grenadillas. He buys them from farmers near the border with Congo. He makes a small profit on every sack of fruit he sells in Kampala.

"My business is still small. But I have a dream," he said. "If I can get someone to hold my hand, and give me a loan to expand my business, that's what I want. I am not waiting for the government to help me."

Farai Mutsaka and Andrew Meldrum reported this story for The Associated Press. Gregory Stachel adapted it for VOA Learning English. Susan Shand was the editor.

interview – n. a meeting at which people talk to each other in order to ask questions and get information

access – n. a way of being able to use or get something

sake – n. the benefit of someone or something

gym – n. a room or building that has equipment for sports activities or exercise

janitor – n. a person who cleans a building and makes minor repairs

sack – n. a bag that is made of strong paper, cloth, or plastic