< 25 Years After UN Women’s Meeting, Equality Remains Distant Goal
Update Required To play the media you will need to either update your browser to a recent version or update your Flash plugin.
By Ashley Thompson
01 October 2020


Twenty-five years ago, the nations of the world came together to make sure that half of its population gained the rights, power and recognition of the other half.

It has not happened yet. And it will not happen anytime soon. 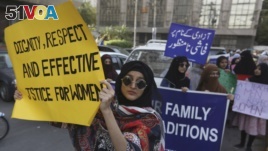 Pakistanis take part in a pro-women rally ahead of Women's Day in Karachi, Pakistan, Friday, March 6, 2020.

In a speech last week during the online General Assembly meetings, he said the COVID-19 crisis has hit women and girls the hardest.

Thursday marked the 25th anniversary of the 1995 U.N. women's conference, which was held in Beijing, China. At the conference, 189 nations accepted a 150-page agreement on gender equality.

Before a high-level meeting to mark the anniversary, the head of the U.N. women's agency noted "slow, terribly uneven" progress in reaching the goals of the agreement.

U.N. Women's Executive Director Phumzile Mlambo-Ngcuka spoke with The Associated Press. She said there has been progress since the Beijing conference, but gains have been small. And, she said, "there is also sometimes...an illusion of much bigger progress than there has been."

Mlambo-Ngcuka pointed to the number of women in legislatures, which grew from about 11 percent in 1995 to a worldwide average of 25 percent today.

There also are 21 female presidents and prime ministers worldwide -- about two times as many as in 1995.

In all, men still hold about 75 percent of the most powerful jobs in the world, Mlambo-Ngcuka said. They "make decisions for us all, and that is what we have to crack."

The 1995 World Conference on Women in Beijing was critical because nations agreed on a path toward gender equality. It was the largest-ever official gathering of women. Yet hundreds of men were among the 17,000 attendees at the official meeting that approved the Beijing Declaration and Platform for Action.

The platform called for strong action in 12 areas for women and girls, such as fighting poverty and gender-based violence. Other areas were making sure that all girls get an education and putting women at top levels of business and government.

The platform also said that women's human rights include the right to control and decide "on matters relating to their sexuality, including their sexual and reproductive health."

Mlambo-Ngcuka said there has been a major "pushback" on reproductive rights. She said developed countries in the northern hemisphere, including the United States, are part of that movement.

"When the U.S. regresses, it is a big deal, not just for the U.S. but for many people who are influenced by trends in the U.S.," she said.

In the European Union, Mlambo-Ngcuka said, some countries want to pull out of The Council of Europe Convention on preventing and fighting violence against women. "You would not have expected that to happen within the EU," she said.

And in Africa and Asia, she noted, there are governments "that have not felt any pressure" to move forward.

Recently, Clinton took part in an online discussion on the 25th anniversary of the Beijing conference at the Georgetown Institute For Women, Peace and Security.

"I think we have a lot of work to do," Clinton said. "I'm worried about the pushback...that we see from authoritarian leaders, in particular, who are trying to turn the clock back."

But she added, "that just energizes me more to speak out, to work with others, to defend those who are on the front lines."

The Associated Press reported this story. Ashley Thompson adapted it for VOA Learning English. George Grow was the editor.

gender - n. the state of being male or female

challenge - n. a difficult task or problem : something that is hard to do

page - n. one side of a sheet of paper especially in a book, magazine, etc.

illusion - n. an incorrect idea : an idea that is based on something that is not true

crack - v. to find an answer or solution to (something)

regress - v. to return to an earlier and usually worse or less developed condition or state

trend - n. a general direction of change : a way of behaving, proceeding, etc., that is developing and becoming more common