< 14-Year-Old Becomes Youngest to Swim across Large US Lake
Update Required To play the media you will need to either update your browser to a recent version or update your Flash plugin.
By Anna Matteo
19 August 2021


A 14-year-old California boy has become the youngest person to swim the entire 34-kilometer length of Lake Tahoe.

The boy's name is James Savage. He completed the swim on August 1. It took him 12 hours to cross the famous lake.

Lake Tahoe is along the state line of California and Nevada. It is known for its natural beauty. Savage's swim across the lake started in South Lake Tahoe, California, and ended in the Nevada town of Incline Village.

His effort was part of a swim event called the Lake Tahoe Triple Crown. It is called the Triple Crown because it is made up of three parts. That includes the true width and length of the lake as well as an area called Vikingsholm. This is a crossing at the southern part of the lake.

Before swimming the 34-kilometer length of the lake, Savage had already successfully completed the other two parts of the competition. Each of those is more than 16 kilometers long.

Savage and his mother, Jillian, talked to a local newspaper about the event and how he prepared for it. They both agreed that the physical preparation was a lot easier than the mental preparation. It takes great mental endurance to complete such a long-distance swim.

However, his mother said she knew that after the first mile her son would succeed.

Jillian Savage told the Tahoe Daily Tribune "I had no doubts whatsoever. He (has) been swimming almost every day -- six, seven days a week -- since he was 8."

This was also not the first time he swam across Lake Tahoe.

Last August, at age 13, Savage became the youngest to complete the 19-kilometer "true width swim." It is also known as the "Godfather" swim. That is because it starts on Tahoe's west shore at a mansion that appears in the movie "The Godfather: Part II."

Jillian Savage said that swimming in open water is what her son prefers. Open water swimming takes place in natural bodies of water, such as lakes, rivers, and oceans.

James said he enjoys swimming in pools, but they are pretty much all the same. "In open water events and competitions," he said, "you can swim in oceans, lakes, and you get to travel around."

Jillian Savage said when her son started swimming in open water events, he told the family he wanted to swim from Alcatraz – the famous prison off the California coast – to the city of San Francisco.

He was only 8 years old when he made that trip. 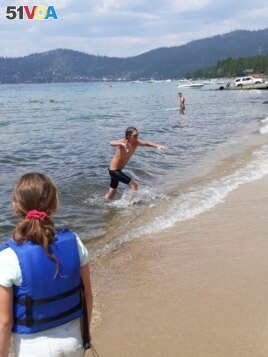 James leaves the water after completing a 12-hour swim across the entire length of Lake Tahoe. (AP Photo/Jillian Savage)

She said, "We let him do it kind of hoping and thinking it would be a one and done." But as soon as her son got out of the water, he said he wanted to do it again.

His latest swim was led by Captain Tom "Reptile" Linthicum of Lake Tahoe Marathon Swim Federation. The team also included an official observer and pace swimmer. (A pace swimmer is an individual who swims alongside or near an open water swimmer.)

Jillian Savage rowed a small boat alongside her son during his swim. The mom's biggest worry was that he might give up after a few hours if he got bored.

She said that it takes many people to make the swim event possible. But in the end, it is really just him "out there by himself."

"It (is) not like he can sit and talk to us when he gets bored," his mother said. "His face is in the water and so really, he (is) by himself."

James said he is not sure what he wants to do next. His mom says he will likely set his goal high.

She added that his swimming challenges keep getting more and more difficult. "I'm kind of afraid to see what he wants to do next," she said.

But whatever his next swimming goal is, his mother said she and his supporters will help him make it happen.

Writers for Tahoe Daily Tribune and the Associated Press reported on this story. Anna Matteo adapted it for VOA Learning English. Ashley Thompson was the editor.

endurance – n. the ability to do something difficult for a long time

doubt – n. a feeling of being uncertain

shore – n. the land along the edge of a body of water

mansion – n. a large and impressive house : the large house of a wealthy person

bored – adj. the state of being weary and restless through lack of interest

challenge – n. a difficult task or problem : something that is hard to do