< World’s Glaciers Melting Faster than Ever
Update Required To play the media you will need to either update your browser to a recent version or update your Flash plugin.
By Dan Novak
06 May 2021


The world's glaciers are melting quickly.

Scientists from the magazine Nature looked at 20 years of satellite data of the world's 220,000 mountain glaciers. They found that since 2015, glaciers have lost 298 billion metric tons of ice and snow per year. That is 31 percent more than 15 years ago, and enough ice melt to put Switzerland under 7.2 meters of water each year.

Scientists say the melting is caused by climate change. They have long warned that warming temperatures are shrinking glaciers around the world.

Romain Hugonnet studies glaciers at ETH Zurich and the University of Toulouse in France. He led the report. The thinning rate of glaciers is twice as high as it was 20 years ago, and "that's enormous," he said.

Half of the world's glacier melt is in the United States and Canada.

Alaska's melt rates are "among the highest on the planet," Hugonnet said. Alaska's Columbia Glacier is losing about 35 meters a year, he added.

Almost all of the world's glaciers are melting. Even glaciers that used to be solid are now melting, such as ones in Tibet.

The melting "mirrors" the worldwide increase in temperature and is from the burning of coal, oil and gas, Hugonnet said. Some smaller glaciers are totally lost. Two years ago, scientists, activists and government officials in Iceland even held a funeral for a small glacier.

The study is the first to use satellite images to examine all of Earth's glaciers that are not connected to ice sheets in Greenland or the Antarctic. Past studies looked at just a small number of the world's glaciers.

Shrinking glaciers are a problem for millions of people who use regular glacial melt for drinking water. Very fast melting can also cause deadly floods in places like India, Hugonnet said. 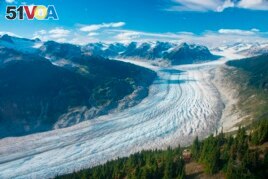 But the biggest threat to the world is rising sea levels. The world's oceans are already rising from climate change because water expands when it gets warmer. Glaciers are responsible for 21 percent of sea level rise. Melting ice sheets in Greenland and Antarctica also cause sea level rise, but to a lesser amount.

Mark Serreze is director of the American National Snow and Ice Data Center (NSIDC) in Colorado. He thinks "sea level rise is going to be a bigger and bigger problem as we move through the 21st century." The NSIDC was not involved in the study.

Scientists said that it could take tens or even hundreds of years to regrow melted glaciers.

Twila Moon studies glaciers at the NSIDC. She is not confident the glaciers can regrow, even if there is a worldwide reduction in emissions and the planet's temperature is controlled.

"We're at a point where we're trying to keep as much ice as possible and slow that rate of loss," she said.

Seth Borenstein reported this story for the Associated Press and Cassandra Garrison reported it for Reuters. Dan Novak adapted it for VOA Learning English. Susan Shand was the editor.

mirror - v. to be very similar to (something)