< World Reacts with Surprise to US Presidential Debate
Update Required To play the media you will need to either update your browser to a recent version or update your Flash plugin.
By George Grow
30 September 2020


People around the world have been reacting to the debate between the two main candidates for president in the United States.

Many people overseas were critical of the language the candidates used during the 90-minute-long event. The two men insulted each other with name-calling and personal attacks.

Speaking to Biden, Trump said," I've done more things in 47 months [as president] than you've done in 47 years" as a U.S. senator and vice president under former President Barack Obama.

Biden described Trump as "the worst president America has ever had." Several times, the former vice president called him "a clown."

The Associated Press reports that the candidates' comments and actions could have a big effect on America's international image.

Observers from Asia and Australia to Europe and Africa looked for possible effects on financial markets.

"If last night's presidential debate was supposed to inform and educate," he wrote, "all it did was merely confirm the credibility deficit in U.S. politics." Hewson accused the candidates of taking part "in what can only be described as a fact-free, name-calling contest."

"With mail-in votes likely to be too high (and possibly questioned), there is a chance that we still will not know the result by Inauguration Day," he said.

By law, the winner of the election is to be sworn in on January 20. Innes warned of a possible constitutional crisis if the election results are questioned or delayed.

In Europe and Africa, people awoke Wednesday to news reports on the debate.

"The comments I've seen from various European press is basically: ‘I'm happy I'm not an American voter this year.' It's just a mess," said Jussi Hanhimaki. He serves as a professor of International History at the Graduate Institute in Geneva in Switzerland.

On Twitter, Kenyan commentator Patrick Gathara noted: "This debate would be sheer comedy if it wasn't such a pitiful and tragic advertisement for U.S. dysfunction." 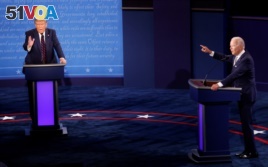 World leaders react to the debate

On Facebook, Danish Prime Minister Mette Frederiksen criticized all the time spent on arguments at the debate Tuesday night. "Fortunately, this is not the case in Denmark. And I never hope it will be like that," she wrote.

Other leaders followed the debate, but kept their distance from American politics. Steffan Seibert is spokesman for German Chancellor Angela Merkel. He said Merkel was "informed about what took place last night." But he refused to comment.

In Russia, a spokesman for President Vladimir Putin said he would not comment on the debate because it might be thought of as an attempt to interfere. "The Russian Federation has never interfered in the internal affairs of the United States and never will," he said.

"I have never witnessed a spectacle similar to the one last night," he wrote on Wednesday. He said the debate showed how there are two Americas that appear unable to exist together without conflict.

The Associated Press reported this story. George Grow adapted it for VOA Learning English. Ashley Thompson was the editor.

merely – adj. just or only

contest – n. a competition; a struggle or conflict

mess – n. disorder or when things are out of place

transfer – n. movement from one place to another

comedy – n. a show with jokes or funny situations

spectacle – n. something unusual or notable; a special show

overarching – adj. something that affects everyone or everything

advantage – n. a condition that puts you in an improved or better position

pitiful – adj. causing feelings of dislike or disgust by not being enough or not being good enough

fortunately – adv. used to say that something good or lucky has happened