< World Food Program Wins Nobel Peace Prize
Update Required To play the media you will need to either update your browser to a recent version or update your Flash plugin.
By Hai Do
09 October 2020


The United Nations' World Food Program (WFP) won the Nobel Peace Prize on Friday. The Norwegian Nobel Committee is recognizing the group for its efforts to fight hunger and improve conditions for peace in areas affected by conflict.

The World Food Program has long specialized in getting assistance to some of the world's most dangerous places. For example, the WFP has air-dropped food in South Sudan and Syria. It also created an emergency service that kept aid flowing as COVID-19 restrictions grounded many flights. 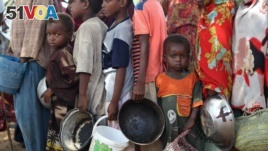 FILE - In this file photo taken on June 16, 2009, internally displaced people line up to receive food aid distributed by World Food Program WFP at one of the camps in Mogadishu.

Berit Reiss-Andersen is the chair of the Norwegian Nobel Committee. She said on Friday, "With this year's award, the (committee) wishes to turn the eyes of the world to the millions of people who suffer from or face the threat of hunger."

In announcing the award, the Nobel committee noted that "Until the day we have a medical vaccine, food is the best vaccine against chaos." And it added, "there will be 265 million starving people within a year, so of course this is also a call to the international community not to underfund the World Food Program."

Traveling in Niger, WFP Executive Director David Beasley credited the men and women of "the WFP family." He said, "They are out there in the most difficult, complex places in the world, where there's war, conflict, climate extremes... They are out there and they deserve this award ..."

Beasley added, "This is the first time I've been speechless ... This is unbelievable," he said. "And wow! Wow! Wow! Wow!"

Dan Smith is director of the Stockholm International Peace Research Institute. He said the Nobel committee had wanted to send a message of both hope and "support for international cooperation."

"Hunger, like climate change, the pandemic and other issues, is a world problem that can only be properly addressed through cooperation," he told Reuters news agency.

The award comes with a gold medal and $1.1 million -- a small amount compared to the money the WFP needs for its work. So far in 2020, the UN agency has received almost $6.4 billion in goods and other donations. More than a third, over $2.7 billion, comes from the United States.

Hai Do adapted this story for Learning English based on Associated Press and Reuters news reports. George Grow was the editor.

underfund - v. not have enough money to do what is needed

wow - interjection, used to show that you are very surprised or pleased

mode - n. a particular way of doing something

deserve - v. used to say that someone or something should or should not have or be given something

pandemic - n. an occurrence in which a disease spreads very quickly around the world

address - v. to deal with