< Woman Throws Away $1M Lottery Ticket, But Gets It Back
Update Required To play the media you will need to either update your browser to a recent version or update your Flash plugin.
By Anna Matteo
26 May 2021


People play the lottery with the hopes of winning money, sometimes a lot of money. Your chances of winning are small, but the payoffs can be big. It takes a lot of luck to win.

But for a woman in Massachusetts winning the lottery involved more than luck. It involved extreme honesty and kindness.

Lea Rose Fiega accidentally threw out a $1 million lottery ticket. But thanks to the kindness and honesty of the owners of the store where she bought it, she eventually collected her winnings. 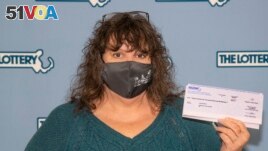 Fiega bought the $30 Diamond Millions scratch-off ticket in March at a convenience store in Southwick, Massachusetts. The store is near her workplace. And it is named the Lucky Stop.

She told the Associated Press on Monday, "I was in a hurry, on lunch break, and just scratched it real quick ... and it didn't look like a winner ..."

So, she handed it to the store owners to throw away. The ticket lay in the store for 10 days.

"One evening, I was going through the tickets from the trash and found out that she didn't scratch the number," Abhi Shah, the son of the store's owners, told a local television station.

So, he scratched off the number. It was $1 million ticket.

Fiega is a regular customer. So, the family knew immediately who had thrown it away.

Shah went to see her at work. Fiega said, "He came to my office and said, ‘My Mom and Dad would like to see you.'" She told the young man that she was busy working. But he said, "No, you have to come over."

So, Fiega went to the store and that is when the family told her the news.

"I was in total disbelief," Fiega said. "I cried. I hugged them."

In January, Fiega nearly died from COVID-19. She said recovering from that was like "winning the lottery." In American English, we also say we "hit the lottery" to mean we have had some good luck, any type of good luck.

Speaking of the family, she is still in disbelief. "I mean, who does that? They're great people. I am beyond blessed," she said.

The store gets $10,000 from the state lottery company for selling the winning ticket. Fiega said she gave the family some money to thank them. She is saving the rest for retirement.

Writers for the Associated Press reported on this story. Anna Matteo adapted it for VOA Learning English. Susan Shand edited it.

lottery – n. a way of raising money for a government, charity, etc., in which many tickets are sold and a few of the tickets are chosen by chance to win prizes

ticket – n. a card or piece of paper that shows that you are participating in a contest, raffle, etc.

convenience store – n. a small store that is open for many hours of the day

customer – n. someone who buys goods or services from a business

hug – v. to hold (something) tightly with your arms