< With Restrictions and Tests, Tokyo Looks like the No-Fun Olympics
Update Required To play the media you will need to either update your browser to a recent version or update your Flash plugin.
By Dan Friedell
24 June 2021


The delayed 2020 Olympics open in Tokyo in one month.

As the Games get closer, people are concerned that the event will not be much fun for anyone involved because of COVID-19 restrictions.

Many Japanese people are still not vaccinated against the coronavirus. For much of 2021, people have been asking Japan's government to urge the International Olympic Committee (IOC) to cancel the event.

But in an opinion article for the Kyodo news agency, a member of the Japanese Olympic Committee said Japan has now been "cornered." The member, Kaori Yamaguchi, won a bronze medal in Judo in 1988.

In the article, she wrote that Japan is in a situation where "we cannot even stop now." She also said the IOC "seems to think that public opinion in Japan is not important."

The article is in response to the recent news that the Games will be held on July 23 as planned and that fans will be permitted. People in Japan continue to protest the Games. 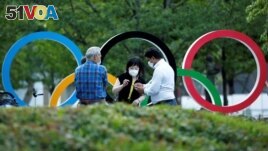 People chat next to Olympic Rings monument outside the Japan Olympic Committee (JOC) headquarters near the National Stadium, the main stadium for the 2020 Tokyo Olympic Games that have been postponed to 2021, in Tokyo, June 23, 2021. June...

Some people are worried that a major international event will risk the health of the nation, which just recently started easing coronavirus restrictions. A state of emergency ended Sunday in Tokyo and six other areas.

While COVID-19 cases are slowing in Japan, only about seven percent of the population is fully vaccinated.

Japan's top COVID-19 advisor is Dr. Shigeru Omi. He said it would be "abnormal" to hold the world's biggest sporting event in the middle of a pandemic. He added that it would be safest to have the competition without fans.

He was overruled, however, by Prime Minister Yoshihide Suga.

Koichi Nakano is a political science professor at Sophia University in Tokyo. He said the plan to go ahead with the Games is similar to the situation of a gambler who has lost too much money.

"Pulling out of it now will only confirm the huge losses made, but carrying on you can still cling to the hope of winning big and taking it all back."

Right now, the official cost of the Olympics is over $15 billion. More than half of the money came from the public. The IOC is only covering about 10 percent of the cost.

The IOC makes much of its money from broadcast payments. If the Games were to be canceled, the IOC would have to pay back up to $4 billion in broadcast rights.

Over a year ago, Japan was set to host what IOC president Thomas Bach called the "best-prepared Olympics ever."

Japan built a beautiful new stadium and made other improvements, hoping to put on an event that would be costly, but memorable for foreign visitors. The hope, experts said, was that people would go home and tell their friends about the great time they had in Tokyo.

Now, however, the Games could close with the reputation of being an event that caused an increase in COVID-19 cases. Japan has reported more than 14,000 deaths from the disease.

People who watch the Olympics on television may still think Japan put on a successful event. However, in Tokyo it will not be the big party many people hoped for.

Dr. Tetsuya Miyamoto is the director of medical services for Tokyo 2020. He said he hopes many people choose to stay home. Otherwise, he said, the virus "has the possibility of spreading ... the numbers could start to explode."

The Opening Ceremony is always an exciting event that people look forward to. Traditionally, many people wonder who will light the cauldron to start the Games. But this year, the questions are likely to include: Will the athletes stay apart as they march in the parade? Will they wear face coverings? Will they even attend?

Stephen Wade wrote this story for the Associated Press. Dan Friedell adapted it for Learning English. Bryan Lynn was the editor.

How do you think the Opening Ceremony will look this year? Tell us in the Comments Section and visit 51VOA.COM.

corner - v. to force (a person or animal) into a place or position from which escape is very difficult or impossible

gambler – n. a person who risks money on the result of a game, race or competition

cling – v. to hold onto something or someone very tightly

reputation – n. the way people think of someone or something

cauldron – n. a container that holds the traditional Olympic flame