< Windows 11: What to Expect in Microsoft’s First Update in Six Years
Update Required To play the media you will need to either update your browser to a recent version or update your Flash plugin.
By Bryan Lynn
30 June 2021

The new version has a simplified design. It also adds new tools to help users better organize their desktop workspace for working on several different tasks at once.

In a video event, Microsoft chief executive Satya Nadella said the changes represent "the beginning of a new generation of computing." He added that with Windows 11, the company was "reimagining everything."

The new operating system (OS) is expected to become available later this year on new computers and other devices. It will also be offered as a free upgrade for users of Windows 10, the last operating system Microsoft released in 2015.

Microsoft's Windows system has long been a leader in the worldwide personal computer (PC) market. But many PC users have moved to other devices, such as smartphones and tablets. Microsoft's newest OS is aimed at such users and the large corporate PC market.

The company said its designers aimed to create a "modern, fresh and clean" look in Windows 11. There is a new Start button, a redesigned task control, new sounds and software updates meant to improve computer speed and performance. 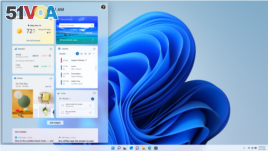 The company says Windows 11 comes with new tools designed to improve multitasking on the PC. The new OS aims to make it easier for users to organize apps and documents on different sized desktops. It also permits the creation of multiple desktops for different purposes.

In addition, the new OS makes it easier for users of Microsoft-based laptops or tablets to connect to larger monitors. One tool shrinks or expands all desktop elements when the user changes monitors. This prevents the need for the user to have to reposition all windows with each monitor change.

To create "a faster way to connect to the people you care about," Microsoft said it made its Teams messenger system part of Windows 11. Users can now instantly connect with others through Teams from the main task controller.

Microsoft will start offering apps that run on Google's Android operating system for the first time. Android is widely used on smartphones around the world and is the major competitor to Apple's iOS system.

Microsoft says Windows 11 users "will be able to discover Android apps in the Microsoft Store and download them through the Amazon Appstore." Since the apps will be limited to those offered by Amazon, some popular Android apps will not be available for Windows users.

Microsoft's chief product officer, Panos Panay, demonstrated the change with a TikTok app, saying it was one of his favorites. "Imagine recording and posting a video from TikTok or using Khan Academy Kids for virtual learning right from your personal computer," Panay said.

The company said its new OS was also improved for gamers, with updated systems for graphics and PC performance and a new Xbox app built directly into Windows 11.

Microsoft also announced that its new Windows Store will let software developers use their own in-app payment systems. The move was aimed at further opening the Microsoft Store "to unlock greater economic opportunity for creators and developers."

Under this system, developers can avoid paying any commissions to Microsoft. App developers who want to use Microsoft's in-app payment system will have to pay a 15 percent commission.

This percentage is much lower than the one for Apple's in-app payment system, which charges commissions of up to 30 percent. Apple's policies were disputed in a recent court case that centers on App Store operation.

In the case, video game company Epic Games accused Apple of holding too much control over the App Store. The company also accused Apple of building a system that unlawfully locks out competition. A judge is expected to rule on the case later this year.

Bryan Lynn wrote this story for VOA Learning English, based on reports from The Associated Press, Reuters, Agence France-Presse, Microsoft and Amazon. Mario Ritter, Jr. was the editor.

update – n. a new form of something that existed at an earlier time

app – n. a computer application or program used for a specific purpose

tablet – n. a small, portable computer that you use by touching the screen

laptop – n. a computer that is small enough to be carried around and used while a person is sitting

monitor – n. a device, like the screen of a TV, that lets a person see computer activities or listen to programs and sound

virtual – adj. something that exists in computers or on the internet, and that is not physical

opportunity – n. a situation in which it is possible for you to do something

commission – n. a payment made to someone who sells goods that is directly related to the amount sold