< Will Colleges Require SAT or ACT Tests in the Future?
Update Required To play the media you will need to either update your browser to a recent version or update your Flash plugin.
By Dan Friedell
17 April 2021


Even before the COVID-19 health crisis, many American colleges and universities started to reconsider the value of tests like the SAT and ACT.

Standardized tests have been criticized for many years. Some education experts argue that they only show how well a student takes tests instead of how much they have learned.

International students and students who did not grow up speaking English have struggled with these tests in the past. Because of this, some universities ended their test requirement.

Research from the company that creates one of these tests, ACT Inc., shows that the number of test-optional schools increased by 200, to over 900, from 2014 to 2019.

But when large group activities, such as testing events for students, were canceled in 2020, even more colleges became "test-optional." This means they do not require, but will still accept, standardized test scores in students' applications.

As a result, many colleges that are known to be highly selective in their admissions policies received more applicants than usual.

A recent story in the Washington Post newspaper said the Massachusetts Institute of Technology, known as MIT, had 66 percent more applicants in 2021 than it did in 2020. The University of California at Los Angeles, UCLA, received 28 percent more. 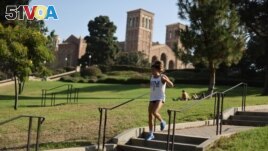 A view of the UCLA campus.

The research by ACT Inc. showed that many schools will continue their test-optional policy after the coronavirus health crisis ends.

Eric Hoover writes about college admissions for the Chronicle of Higher Education. He said colleges will continue to consider test scores. But test-optional policies should help students who struggle with tests.

"If you're someone who doesn't love taking tests and you feel like tests are not the best representation of who you are as a student and what your potential is, then I think it's fair to say that the world's getting a little kinder and gentler for the many, many, great students who for whatever reason just don't fare as well on the ACT or the SAT, those kind of standardized tests."

Earlier this year, VOA spoke with Kidist Bekele, a student from Annandale High School in northern Virginia. She was born in Eritrea and only recently came to the U.S.

VOA spoke to her again to ask about test-optional applications. Bekele said she had taken the SAT before the pandemic and was not happy with her score of 1120 out of a possible 1600. She was planning to take the test again, but it was canceled. She was glad that colleges considered her whole record and did not disqualify her because her score was lower than she hoped.

"I know a lot of people that are really good with school, have a good GPA, but still don't do good on the ACT. I think it's all about using time and test-taking skills."

She was accepted to a number of universities and is currently considering George Washington University in Washington, D.C., Virginia Commonwealth University and Virginia Tech. All three schools were test-optional and she did not send her score.

Bekele said she moved out of English as a Second Language classes two years ago. But she still had trouble with some of the reading parts of the tests.

"The writing was easier than the reading, but the reading was very hard," she said. "For people like me, it's not a good representation of what people do in school."

Hoover, the education writer, noted that universities use test scores for reasons other than deciding who gets in. They use them as a way to find out which students to recruit and as a way to decide to whom they might offer financial aid.

Bekele said she understands test-optional schools may still use test scores to make a choice between one student who submitted a score and one who did not.

"They might choose that student even though it was a test-optional school. It would definitely be recognized," she said.

Zoe Coyle is from Cleveland, Ohio. She will start her first year at Tufts University in Boston, Massachusetts in the autumn. Tufts was test-optional, but she still sent her scores. Her high school's advisor told students to do that. "If we didn't," she said, "then it would be telling the school that we were below average."

She said test-optional admissions give students who are outstanding at something other than academics the confidence to send applications. She spoke about her friends who wanted to study music and theater in college. They chose not to send their scores.

Coyle said she sees how test scores can help colleges choose students, but she is pleased that they are making scores less important.

"It does feel like notes from teachers and personal essays are way more important, and it kind of feels like colleges are leaning into that more. And for some colleges, COVID kind of gave them the opportunity to take bigger steps in that direction, which I guess is one of the few benefits of COVID."

ACT Inc. said about 30 percent more schools put a test-optional policy in place in 2020. Whether they continue that policy may depend on how the current group of college students perform.

Do you think colleges that switched to test-optional admissions in the last two years should stay that way? Tell us in the Comments Section and visit 51VOA.COM.

optional –adj. available as a choice but not required

potential –n. a quality that something has that can be developed to make it better

fare –v. to do something well or badly

standardized –v. things that are similar and consistent

disqualify –v. to stop or prevent (someone) from doing, having, or being a part of something

recruit –v. to find suitable people and get them to join a company, an organization, the armed forces, etc.

tuition –n. money that is paid to a school for the right to study there

confidence –n. a feeling or belief that you can do something well or succeed at something

essay –n. a short piece of writing that tells a person's thoughts or opinions about a subject

lean in –v. to give your time or effort in order to do something or make something better