< Why Do We Say, ‘How Come?’
Update Required To play the media you will need to either update your browser to a recent version or update your Flash plugin.
By Caty Weaver
18 June 2021


Hello! Welcome to Ask a Teacher. This week we answer a question from Shinji in Japan. 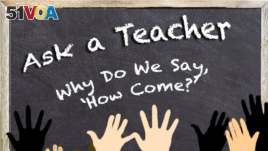 I think I once learned the expression "How come?" which I hear is to explain reasons. For example, "How come the schools are cancelled?" But I rarely come across this construction, recently, both in writing and speaking. I am not quite sure about the distinction between this and "why." If it would be all right with you, I would appreciate your lesson on it. Sincerely Yours,

And here's the answer:

When I started to look into this question, I found that, as you experienced, the expression is not as common now as it was in the past. The first use in American English is recorded around 1848. The highest point for its use was in the 1940s and 1950s. Its use has dropped since 2012.

The Merriam-Webster Learner's Dictionary says "how come" is "used to ask why something has happened or is true." It is a short form of "how did it come about that." The dictionary also says the expression is usually found in the United States and is used in casual speech. When it appears in news headlines, Merriam-Webster says the purpose is to create a more relaxed quality to the writing.

For example, books that have "how come" in the title seem to be aimed at children. Even presidents sometimes want to sound more casual, as President Barack Obama did in a 2017 campaign speech for the Democratic candidate for governor of Virginia: "How come we can't get things through Congress? How come we can't get things through the state house? Because you slept through the election," Obama said.

Word order of a question

When we use "why" to ask a question, we must change the usual English word order. Let us begin with the statement,

You are cooking lunch.

To ask a question with "why," you would change the order of the subject (you) and the verb (are), as in this question:

Why are you cooking lunch?

But when we use "how come," the word order of the statement does not change:

How come you are cooking lunch?

It could be that the simplicity of this question form makes it easier for children to use and gives it a more casual feel. I hope this helps you understand the expression, Shinji.

What question do you have about American English? Send us an email at learningenglish@voanews.com

And that's Ask a Teacher.

casual – adj. done without much thought, effort, or concern

headline – n. the title written in large letters over a story in a newspaper

title – n. the name given to something (such as a book, song, or movie) to identify or describe it

Do you have a question for the teacher? We want to hear from you. Write to us in the Comments Section.