< Why COVID-19 Conspiracies Are So Common
Update Required To play the media you will need to either update your browser to a recent version or update your Flash plugin.
By Alice Bryant
12 April 2021


As COVID-19 continues, psychologists and misinformation experts are studying why the pandemic has led to so many conspiracy theories.

Such theories have persuaded some people to avoid facial coverings, social distancing and vaccines. 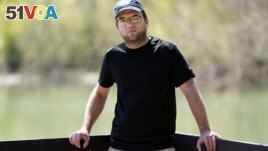 Daniel Roberts poses for a picture Monday, April 5, 2021, in McMinnville, Tenn. Roberts received a COVID vaccine over the objections of his family, who are against being vaccinated.

Opposition to vaccines by some Americans is not new. Daniel Roberts, a 29-year-old Tennessee man, says he had not received a vaccination since he was six years old. His parents taught him that vaccines were dangerous. And when the coronavirus arrived, they called it a hoax. The vaccine, they said, was the real threat.

So when Roberts got his COVID-19 shot at a Walmart store last month, it felt like a break from his past.

"Five hundred thousand people have died in this country. That's not a hoax," Roberts told The Associated Press. He was speaking about the conspiracy theories believed by his family and friends. "I don't know why I didn't believe all of it myself," he said. "I guess I chose to believe the facts."

Experts are seeing links between beliefs in COVID-19 falsehoods and dependence on social media as a main source of news and information.

And they are finding that COVID-19 conspiracy theories provide people with a false sense of empowerment. By offering hidden explanations, they give the believer a feeling of control in a situation that seems frightening.

"We need to learn from what has happened, to make sure we can prevent it from happening the next time," said Richard Carmona. He was U.S. Surgeon General during former President George W. Bush's administration. "Masks become a symbol of your political party. People are saying vaccines are useless," he said.

About one in every four Americans said they believe the pandemic was "definitely" or "probably" created on purpose. That information comes from a Pew Research Center questionnaire from June. Other conspiracy theories center on economic restrictions and vaccine safety. More and more, these untrue claims are causing real-world problems.

In January, anti-vaccine activists forced a vaccine center in Los Angeles to close for a day. In Europe, people burned nearly 80 cell towers because of claims that 5G wireless signals were causing the infection. In other places, medical workers were attacked and a pharmacist destroyed vaccine doses. In addition, hundreds of people died after taking chemicals they believed to be cures.

The most popular conspiracy theories often help people explain complex events, when the truth may be too troubling to accept. That information comes from Helen Lee Bouygues, founder and president of the Reboot Foundation in Paris. The foundation researches and pushes for critical thinking in the internet age.

Such theories often appear after important or frightening times in history: the moon landing, the September 11 attacks, or the assassination of President John F. Kennedy.

This drive is so strong, Cook said, that people often believe theories that go against each other. Roberts, for example, said his parents at first thought COVID-19 was caused by cell towers. Then, they decided the virus was a hoax. The only explanations they did not accept were those coming from medical experts.

Trust in American establishments has been further harmed by false statements from leaders like President Donald Trump. He repeatedly said that the virus was not dangerous. And he suggested bleach, a chemical cleanser, as a treatment. In addition, the former president spoke publicly against his administration's own health experts.

An examination of data by Cornell University researchers found that Trump was one of the greatest drivers of false coronavirus claims. Studies also show that conservatives are more likely to believe conspiracy theories or share COVID-19 misinformation.

Carmona said he recently spoke to a group of executives about the coronavirus. One executive suggested the Chinese government and Democrats in America created the pandemic to hurt Trump's reelection chances.

A shared distrust in American establishments has helped to unite several groups that agree on COVID-19 conspiracy theories. They include far-right groups, anti-vaccine activists and supporters of the conspiracy group QAnon.

Researchers are thinking about what does and does not work when talking to friends or family who support untrue claims. And they are finding possible solutions to the bigger problem of online misinformation. These include stronger efforts by social media companies and possibly new government rules.

Experts also say teaching critical thinking skills and how to decide what news is factual is needed as the internet grows as a news source.

In recent years, an idea called inoculation theory has become popular. Inoculation is another term for vaccination. The theory involves using online games or tutorials to train people to think more critically about information. One example is from Cambridge University researchers. They created the online game Go Viral!, which teaches players by having them create their own misleading materials.

Studies show the games increase resistance to online misinformation. But like many vaccines, the effects are temporary. This leads researchers to wonder how to make them more permanent.

Someday, such games might be placed as advertisements before online videos. Or prizes may be given as a way to grow interest in protecting the public against misinformation.

The Associated Press reported this story. Alice Bryant adapted it for Learning English. Bryan Lynn was the editor.

conspiracy theory – n. a theory that explains an event or situation as the result of a secret plan by usually powerful people or groups

hoax – n. an act that is meant to trick or deceive people

mask – n. a covering used to protect your face or cover your mouth

symbol – n. an action, object, event, etc., that expresses or represents a particular idea or quality

definitely – adv. without a doubt

cell tower – n. a base station where electronic communications equipment and cellular antennae are placed

data – n. facts or information used usually to calculate, analyze, or plan something

tutorial – n. a book, computer program or something else that teaches someone how to do something by explaining each stage of a process