< Why Are There so Many No-Hitters in Baseball This Year?
Update Required To play the media you will need to either update your browser to a recent version or update your Flash plugin.
By Dan Friedell
20 May 2021


The most important battle in the game of baseball centers on the pitcher and the batter.

The pitcher tries to throw the ball so the batter cannot hit it. If the batter does hit the ball, defenders have to catch it. If the defense does not get the ball before the batter reaches first base, the result is called a "hit."

The 2021 baseball season started two months ago. So far, it has been harder than almost any year before to get a hit. The average number of hits per team in each game is less than eight. The last time there were so few hits was in 1908.

Sometimes, one team does not get any hits. And that is called a "no-hitter."

No-hitters are rare in baseball. There are usually only a few every season. But this year there have been six. The record for one year is seven. And three fourths of the season remains.

Many fans are asking, "Why are there so many no-hitters this year?" Baseball experts are not totally sure. 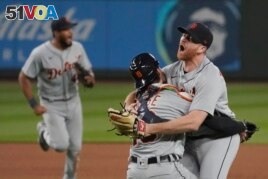 Some say it just could be luck. Others say a number of things are making it hard for hitters. For example, they say pitchers are better than ever.

Matt Chapman is a batter for the Oakland Athletics. He said "the pitchers are only getting better." He said the pitchers have stronger ideas about how to stop batters.

In other seasons, teams combined for about 20 hits in each game. This year the number is under 15. But, even in other seasons with fewer hits, no-hitters were not common.

David Bell is a former player and is now the manager of the Cincinnati Reds. One of his pitchers had a no-hitter on May 7.

"My instincts tell me the pitching is getting better," he said.

But he also said people who study the players on the other teams and create a strategy for the pitchers, are doing a better job. They are called scouts. The scouts also get detailed information about the speed of hits and the flight of the ball from cameras and radar in every stadium.

The scouts help the defensive players decide where to stand so they can be in a good position to stop the ball if it is hit.

An Associated Press story notes that during a five-year period starting in 1988, the average number of hits in each game by each team stayed about the same, but the number of no-hitters went up and down each season.

Dusty Baker is the manager for the Houston Astros. He played in the 1970s and 1980s. He said batters are different than they were when he played. They are trying to hit the ball a long distance.

"Over the last few years, everybody's trying to hit homers," he said.

A home run is when the ball travels a long distance over the fence. It adds at least one to the team's score.

But it is not easy to hit a home run. Sometimes a batter will swing with less control and miss the ball completely. Miss three times, and your turn at bat is over.

The magazine Sports Illustrated recently suggested that, even if no-hitters are the result of "luck and randomness," the conditions for them have never been better.

Some baseball organizations are changing the rules so that batters have a better chance. One league increased the distance between the pitcher and the batter by about 30 centimeters. As a result, the batter has a little more time to decide to swing. Another league prevents the defense from moving too many players to the side of the field where a batter's hits usually go. This makes it harder for the defense.

"I think that's kind of the way the game's trending right now," he said.

Mike Matheny is the manager of the Kansas City Royals and a former player. He is worried that what was once seen as rare will no longer create excitement and be celebrated.

"I really hope fans don't start to think it's common."

Dan Friedell adapted this story for Learning English based on reports by the Associated Press. Mario Ritter, Jr. was the editor.

Why do you think there are more no-hitters than usual in baseball this year? Tell us in the Comments Section and visit 51VOA.COM.

manager –n. someone who directs a team in American baseball

instinct –n. a way of behaving, thinking or feeling that is not learned

strategy –n. a careful plan or method for reaching a goal over a long period of time

stadium –n. a very large building that has a large open area and many seats for sports or other events

randomness –n. a way that does not show any order, plan or pattern

trend –n. the general direction in which something appears to be headed