< WHO Says Africa’s Thin Vaccine Supply to Drop 25 Percent
Update Required To play the media you will need to either update your browser to a recent version or update your Flash plugin.
By Jonathan Evans
14 September 2021


World Health Organization Africa director Matshidiso Moeti says that Africa will get 25 percent fewer COVID-19 vaccine doses than expected by the end of 2021.

Her comments to reporters last week came as the Africa Centers for Disease Control and Prevention said just over 3 percent of people in Africa have been fully vaccinated.

African health officials were surprised by the announcement that the COVAX effort to give vaccines to low-and middle-income countries is again lowering its delivery expectations. The United Nations runs the COVAX plan, which was organized to make certain poorer countries get the vaccine. 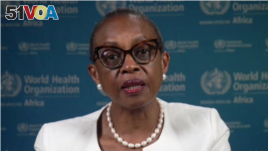 Moeti told reporters that the announcement was "in part because of the prioritization of bilateral deals over international solidarity."

Moeti noted that certain COVAX difficulties, such as export controls on vaccine doses and the introduction of booster shots by some countries, are the reasons for the 25 percent reduction. A booster shot is an extra amount of a vaccine given to provide added protection against a disease.

Moeti noted that COVAX has delivered over 5 million vaccine doses to African countries in September. But, she added, "three times as many doses have been thrown away in the United States alone" since March.

"Every dose is precious," Moeti said.

She said that wealthy countries have promised to share 1 billion doses worldwide, but, so far, only 120 million have been released.

"If companies and countries prioritize vaccine equity, this pandemic would be over quickly," Moeti added.

The WHO says the goal of vaccinating 10 percent of people in Africa by the end of September will not be met. The aim, now, is to vaccinate 40 percent by the end of the year.

The Africa CDC says 145 million vaccine doses have been secured across the continent. About 111 million doses, or 77 percent, have been given out.

Many more doses are needed, and there is worry.

Some richer countries, including the United States, are beginning to give out booster shots, using up more vaccine. The WHO director-general called for a delay in giving out booster shots until the end of the year to deal with the severe vaccine inequality.

John Nkengasong is the Africa CDC director. He told reporters last week that "the problem we have with the third (booster) doses is we have not seen enough science" to be certain it is necessary.

Nkengasong said he fully understands that people with weak natural body defense systems against disease need to increase their protection. But for "otherwise healthy individuals, I just haven't seen enough science," he added.

African countries have recently seen a strong increase in COVID cases, driven mostly by the delta variant. But the WHO Africa director reported a decrease of nearly 25 percent in new cases at the beginning of the month. She said that is "the steepest drop in eight weeks since the peak in July."

dose – n. the amount of a medicine, drug, or vitamin that is taken at one time

priority – n. something that is more important than other things and that needs to be done or dealt with first

solidarity – n. a feeling of unity between people who have the same interests, goals, etc.

steep – adj. having a very sharp slope; almost straight up and down

peak – n. at the highest point or level