< WHO Considers Declaring Monkeypox a Global Health Emergency
Update Required To play the media you will need to either update your browser to a recent version or update your Flash plugin.
By Dan Novak
23 June 2022


The World Health Organization (WHO) held an emergency meeting Thursday over the worldwide spread of monkeypox.

The health agency is considering whether to declare the outbreak a global health emergency. But critics say the WHO is only deciding to act because the disease has spread to the West from Africa.

The declaration means the WHO considers the monkeypox outbreak to be an "extraordinary event" and that the disease is at risk of spreading to more countries. 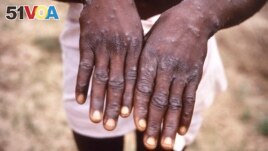 This 1997 image provided by the CDC during an investigation into an outbreak of monkeypox, which took place in the Democratic Republic of the Congo (DRC), formerly Zaire, and depicts the dorsal surfaces of the hands of a monkeypox case patient.

Many scientists doubt any declaration would help slow the disease. Developed countries recording the most recent cases are already moving quickly to shut down the spread.

Last week, WHO Director-General Tedros Adhanom Ghebreyesus called the recent spread of monkeypox "unusual and concerning." It has been identified in more than 40 countries, mostly in Europe. Monkeypox has sickened people for many years in central and west Africa, where one version of the disease there kills up to 10 percent of people. Outside of Africa, no deaths have been reported.

Oyewale Tomori is a Nigerian virologist who advises several WHO groups. He was critical of the WHO for organizing a meeting only after the disease appeared in Europe. "If WHO was really worried about monkeypox spread, they could have convened their emergency committee years ago when it reemerged in Nigeria in 2017," he said.

Until last month, monkeypox had not caused large outbreaks beyond Africa. And scientists have not found any major genetic changes in the virus. A leading adviser to WHO said last month that the increase of cases in Europe was likely tied to sexual activity among gay and bisexual men at two music festivals in Spain and Belgium.

People with monkeypox often experience symptoms like fever, body aches and a rash. Most recover within weeks without needing medical care.

The U.S. Centers for Disease Control and Prevention has confirmed more than 3,300 cases of monkeypox in 42 countries where the virus has not been typically seen. More than 80 percent of cases are in Europe. Meanwhile, Africa has already seen more than 1,400 cases this year, including 62 deaths.

David Fidler is a health expert at the Council on Foreign Relations. He said WHO's new attention towards monkeypox during its spread beyond Africa could worsen the divide between rich and poor countries seen during the COVID-19 pandemic.

He added that it was unclear if Africans even wanted monkeypox vaccines, given the danger of more common diseases like malaria and HIV.

"Unless African governments specifically ask for vaccines, it might be a bit patronizing to send them because it's in the West's interest to stop monkeypox from being exported," Fidler said.

In January 2020, the WHO declared that COVID-19 was an international emergency. But few countries took notice until March, when the organization described it as a pandemic, weeks after other health organizations had already done so. The WHO was later criticized for its response throughout the pandemic, which may have created a quicker response to monkeypox, experts say.

Salim Abdool Karim is a disease expert with the University of KwaZulu-Natal in South Africa. He said the WHO and others should be doing more to stop monkeypox from spreading around the world. But he did not think an emergency declaration would help much. He said Africa knows how to handle diseases like monkeypox.

"Maybe they need vaccines in Europe to stop monkeypox, but here, we have been able to control it with very simple measures," Abdool Karim added.

Dan Novak adapted this story for VOA Learning English based on reporting from The Associated Press.

extraordinary — adj. very different from what is normal or ordinary

convene — v. to come together in a group for a meeting

gay — adj. sexually or romantically attracted to someone who is the same sex

bisexual — adj. sexually attracted to both men and women

rash — n. a group of red spots on the skin that is caused by an illness or a reaction to something

patronize — v. to talk to in a way that shows that you believe you are more intelligent or better than other people