< WHO Chief Calls for Urgent Assistance to Lebanon
Update Required To play the media you will need to either update your browser to a recent version or update your Flash plugin.
By Bryan Lynn
21 September 2021


The head of the World Health Organization says Lebanon is in urgent need of assistance to help it deal with several crises. 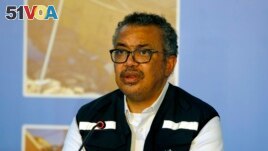 He said Lebanon needs emergency and development support to deal with severe economic and structural problems. One of the most immediate issues is a shortage of fuel and medicine.

Ghebreyesus expressed worry that conditions in Lebanon had led many health workers to leave the country. The loss has left the country short of much needed human resources, he said.

Lebanon is a country of 6 million people, including over 1 million Syrian refugees.

Earlier this month, Ghebreyesus spoke to reporters at a rebuilt WHO warehouse near the city's port. The building it replaces had been destroyed in a massive accidental explosion last year. The warehouse was used for storing drugs and other medical supplies.

Ghebreyesus noted that the Lebanese people were already struggling with financial and political problems. The COVID crisis and the deadly explosion brought additional disaster.

"This is heavy. This is very heavy," the WHO chief said. "I don't know if there is any country in such a situation, which is really dire."

For months pharmacies, stores that sell medicine, have been running low on supplies. Widespread panic buying had emptied many stores of drugs. Many medicine makers decided to hold on to their supplies, planning to sell the medicine later at higher prices.

Ghebreyesus said drug shortages threaten tens of thousands of people in Lebanon, including cancer patients. Medical workers are forced to use substitute medications for patients. Reports suggest that thousands of doctors and nurses have left the country in the past year to seek jobs elsewhere.

"Nurses are leaving, doctors are leaving," Ghebreyesus said. "This is very serious. Its impact will last for many years to come."

The WHO's director for Lebanon, Iman Shankiti, said the U.N. agency has been trying to help get medicine for cancer and critical patients. The WHO also has helped provide fuel for several hospitals for the next few months until a more lasting solution can be found.

"It is only -- as we call it -- a band-aid, to ensure that the service continues running," Shankiti said. "The U.N. again will not be able to replace the system itself."

Lebanon has been without a fully operating government for over a year. A new government was recently named. The leaders promised to hold talks with the International Monetary Fund in an effort to negotiate assistance from international donors.

Ghebreyesus said the WHO will be sending a team of technical experts to help the Lebanese government find solutions and develop plans for reforms.

The Associated Press reported this story. Bryan Lynn adapted the report for VOA Learning English. Caty Weaver was the editor.

pharmacy – n. a shop that prepares and sells medicines

panic – n. a sudden, strong feeling or worry of fear that makes people unable to think or behave calmly

alternative – n. one or more things available as another possibility

impact – n. the effect a person, event or situation has on someone or something

band-aid – n. a name for a small piece of cloth or plastic that sticks to your skin to cover and protect a small wound