< When to Use ‘Some’ and Not ‘A’ or ‘An’
Update Required To play the media you will need to either update your browser to a recent version or update your Flash plugin.
By Dr. Jill Robbins
26 August 2021


On this program, you have learned about count and noncount nouns.

(If you need to review that point, please see our article, Understanding Noncount Nouns.)

A count noun is something you can count and make plural, as in "two trees," "five girls" and so on. Noncount nouns are grammatically singular. For example, "rice" is noncount, but it is made up of many small pieces. You can count glasses of water but you would not normally count "waters" unless you are talking about the many kinds of water on sale in some markets. 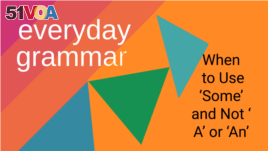 Count nouns and some

We can count "songs" but not "music" so "song" is a count noun while "music" is a noncount noun.

They have an office on the first floor.

I left a banana on the table for you.

With the plural form of count nouns, we can use "some" instead of "a" or "an."

Some businesses have closed on my street.

I gave her some apples to take to her mother.

Noncount nouns and some

Now, let us turn to the question of noncount nouns. Can we use "a" or "an" or must we use "some?" Consider these examples:

You should come inside - there is some bad weather coming.

The children asked for some money to buy books.

We would not say "a weather" or "a money." The word "some" is an adjective meaning an unspecified amount, so it goes well with noncount nouns. Of course, you need not use an adjective or an article with plural nouns.

It is interesting to compare the count and noncount nouns for related ideas, like letter – a count noun – and mail, a noncount noun:

Sandy found a letter from her sister when she pulled some mail out of the box.

Another pair of such related words is cloud – a count noun – and weather, a noncount noun.

There is not a cloud in the sky, so we should have some dry weather for the party.

And every workday here at Learning English, we write a story – count noun – for you about the latest news – a noncount noun:

The editor asked me to write a story about some news from Asia.

To sum up, you can use "a" or "an" before singular count nouns, and "some" before plural count nouns and any noncount nouns.

Here are some sentences for you to complete with a, an, or some. Write your answers in the comments.

plural – adj. grammar: relating to a form of a word that refers to more than one person or thing

consonant - n. a speech sound (such as /p/, /d/, or /s/) that is made by partly or completely stopping the flow of air breathed out from the mouth

vowel – n. a speech sound made with your mouth open and your tongue in the middle of your mouth not touching your teeth, lips, etc.

editor – n. the person at a media company who prepares (something written) to be published or used

specify – v. to name or mention (someone or something) exactly and clearly; or to be specific about (something)

Can you make a new sentence with "some" and a noncount noun? We want to hear from you. Write to us in the Comments Section.