< What’s Behind the Unrest in Kazakhstan
Update Required To play the media you will need to either update your browser to a recent version or update your Flash plugin.
By Dan Novak
06 January 2022


The Central Asian nation of Kazakhstan is experiencing the worst street protests since gaining independence some 30 years ago.

Police said they had killed several rioters in the main city of Almaty and arrested 2,000 people. State television reported that 13 members of the security forces had also died in the violence. Reuters reported that both the presidential home and the mayor's office in Almaty were on fire.

President Kassym-Jomart Tokayev first sought to calm the crowds by dismissing the entire government early Wednesday. By the end of the day, he changed his strategy. 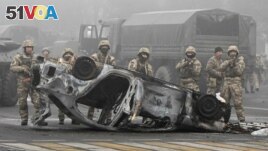 Troops are seen at the main square where hundreds of people were protesting against the government, after authorities' decision to lift price caps on liquefied petroleum gas, in Almaty, Kazakhstan January 6, 2022. (REUTERS/Mariya Gordeyeva)

Tokayev then claimed the protestors were foreign-trained terrorists. Then he appealed to a Russian-led military alliance, the Collective Security Treaty Organization (CSTO), for help in stopping the unrest.

Overnight, Russia sent troops into the former Soviet Union republic to help control the protests. By Thursday afternoon, the Kazakhstan military regained control of the city's airport which had been taken earlier by protestors.

The unrest is causing concern in Kazakhstan's two powerful neighbors: Russia and China. Kazakhstan is an important Russian ally. And the country sells most of its oil exports to China.

Why are people angry?

Kazakhstan declared independence in 1991 after the breakup of the former Soviet Union. The country has a large natural supply of oil, natural gas, uranium, and other metals.

Its wealth gave rise to a solid middle class, but poverty is still widespread. The average national monthly salary is just under $600. The banking system is failing and corruption is commonplace.

The protests started after a sudden rise in the price of car fuel in the western oil town of Zhanaozen. Many people there feel that the area's energy wealth has not been spread fairly among the population. In 2011, police killed at least 15 people in the city who were protesting in support of oil workers dismissed after a strike.

When gas prices doubled overnight Saturday, anger exploded. People in nearby cities quickly joined in and within days large protests had spread to the rest of the country. The tens of thousands of protestors are now aiming to overthrow the government.

Who is leading the protests?

Kazakhstan had seen major demonstrations in 2016 and 2019. But critics of the government are usually suppressed. So, while the current protests are unusually large, no leaders have arisen.

Much of the anger displayed on the streets was directed at former President Nursultan Nazarbayev. In 2019, Nazarbayev stepped down and named Tokayev as the next president. Nazarbayev, however, continues to hold power as head of the security council that oversees the military and security services.

Tokayev announced Wednesday that he was taking over from Nazarbayev as security council head. He also said the government would seek reforms and possible political liberalization. But Tokayev's actions suggested he would continue to suppress the protestors.

Dan Novak adapted this story for VOA Learning English based on reporting from The Associated Press and Reuters.

mayor — n. an official who is elected to be the head of the government of a city or town

strategy — n. a careful plan or method for achieving a particular goal usually over a long period of time

salary — n. an amount of money that an employee is paid each year