< What Lessons Will Students Learn from Reduced Class Time?
Update Required To play the media you will need to either update your browser to a recent version or update your Flash plugin.
By Dan Friedell
20 February 2021


Most public high school teachers in the United States never expected a school year like the current one. School buildings closed across the country in March of 2020. Education went online and distance learning has continued since.

Teachers around the country quickly found they would not be able to teach as much material as usual to their students. The educators had to make choices about what content to cover and what could be dropped.

So, over time, English teachers began cutting some books and writing projects from their teaching plans.

History teachers began to shrink their coverage of some periods.

Science teachers had to remove experiment-based work because school laboratories were no longer available.

While some students were able to keep up with their studies while working from home, many struggled without being at school. In the current school year, many teachers have not even met their students in person.

Alison Reeves is a Spanish teacher at a high school in Fairfax, Virginia, about 30 kilometers outside of Washington, D.C. She said by this time in a school year, she usually knows her students well. But this year is different. 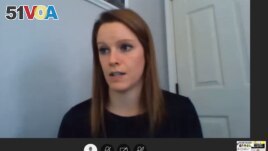 Alison Reeves, a Spanish teacher in Fairfax, Virginia, has been teaching from home during the 2020-2021 school year. (Screenshot courtesy Alison Reeves)

"I have gotten a good sense of who they are, but you learn different things virtually. I know their voices when they answer questions, but I don't know what their face looks like, per se."

She said distance learning is especially difficult for students in language classes.

At the start of a normal school year, she explained, some students can be shy about saying a word incorrectly in front of their friends. But after a while, they understand everyone in the class is learning a new language. At that point, they are not shy anymore.

But at home, Reeves said, the students are shyer. They worry about making mistakes in front of their parents.

Because of this, Reeves said, she has made speaking less of a priority this year than in past years. She is more centered on helping her students learn to write in Spanish. In addition, she usually has her students learning two different past tenses by now. This year she has centered more on the present tense.

Reeves is not the only teacher changing her teaching plan.

Tassie Zahner teaches Advanced Placement U.S. History at a high school in Silver Spring, Maryland, about 15 kilometers from Washington, D.C. She has been teaching for almost 10 years.

At the end of the school year, her students take a national history test. Colleges use the scores to help make admissions decisions.

Zahner cut how much time she spends on different parts of American history. For example, she usually spends 18 class periods teaching about the last part of the 19th century. That takes over three weeks. This year, she did it in four hours.

As a result, she thinks some of her students' test scores will not show their true ability. Zahner said the leaders of her school are not that worried about the test scores this year. But her students are.

"I have students who want that score on the exam. They do care very much. And not being able to give them the same kind of information and the same rigor that we do in the real classroom has been very difficult for me and for them."

Jake Stanford teaches English at Palm Springs High School in California. He has been teaching for 13 years. His school changed its schedule because of the pandemic.

That greatly affected writing projects he would normally give his students.

The writing projects require a lot of time. Students write and rewrite a paper several times before they are finished. Stanford said he normally asks students to write 24 papers over the year. But, not this year.

"It's just not been realistic to try to expect that. And I have not been able to. And I think that's what I've been hearing from colleagues as well."

Stanford said his students will do half the usual number of writing projects.

Cristin Espinoza teaches English in Denver, Colorado. She said she had to remove some of her favorite projects from her teaching plan this year. Class time used to be 90 minutes long, she said. Now she sees her students for about 20 minutes each class.

Some teachers, however, are also reporting educational successes within the new structure. Jake Stanford said some of his students are performing better than in the past. Due to the coronavirus health crisis, they don't have as many other things going on.

"They are absorbing material and gaining a higher level of skill very, very quickly."

Alison Reeves said she hopes colleges will consider the pandemic's effects on high school education when they make admissions decisions.

She is hopeful about the future for students, overall, even with less teaching time and subject coverage. They are learning how to deal with difficult educational conditions. "That truly," she said, "will take you much further than a lot of the content."

"We have students at my school that are working and helping support their families and taking care of multi-generational households, and still showing up every day and going to class and doing their work. That's impressive."

Dan Friedell wrote this story for Learning English. The Associated Press's Michael Melia contributed to this report. Caty Weaver was the editor.

What topic would you cut from your curriculum in a pandemic? We want to hear from you. Write to us in the Comments Section.

virtual- adj. existing or occurring on computers or on the Internet

shy- adj. tending to avoid something because of nervousness, fear, dislike, etc.

per se- adv. by, of, or in itself — used to indicate that something is being considered by itself and not along with other things

rigor- n. the quality or state of being very exact, careful, or strict

colleague- n. a person who works with you : a fellow worker

absorb- v. to learn (something)