< What Is the US Debt Limit?
Update Required To play the media you will need to either update your browser to a recent version or update your Flash plugin.
By Hai Do
06 October 2021

The White House Council of Economic Advisors warned before the meeting that the United States government will default on its obligations if Congress does not raise the debt limit by October 18. 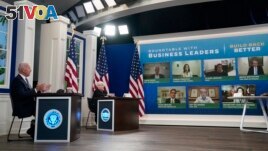 President Joe Biden speaks during a meeting with business leaders about the debt limit in the South Court Auditorium on the White House campus, Wednesday, Oct. 6, 2021, in Washington. Treasury Secretary Janet Yellen is second from left. (AP Photo/Evan Vuc

A default is a failure to meet the legal obligations of a loan.

The council said millions of Americans might not receive their payments from Social Security and government healthcare. A default could also affect national defense and pandemic services.

Since many countries depend on the U.S. monetary policy, it said a default "would likely cause credit markets worldwide to freeze up and stock markets to plunge. Employers around the world would likely have to begin laying off workers."

What is the debt limit?

Like some of us, governments sometimes spend more money than they receive from taxes. So, they have to borrow money by issuing bonds, or debts, to be repaid later.

In the U.S., Congress has the power to set a debt limit. It is "the maximum amount of debt that the Department of the Treasury can issue to the public or to other federal agencies."

Since 1960, Congress has changed the debt limit 78 times under both Republican and Democratic administrations to pay for government operations.

Raising the debt limit does not mean that Treasury has more money to spend. It only permits the U.S. government to "finance existing legal obligations." When the limit is reached, the Treasury cannot issue more debt or borrow more money.

What is the current situation?

In August 2019, the U.S. Congress passed a budget deal, with support from both Republican and Democratic lawmakers, that raised spending and suspended the debt limit for two years.

Under the agreement, the money borrowed during the suspension of the debt limit will be added to the previous limit of $22 trillion. An additional $6.5 trillion had been borrowed since the 2019 tax cuts and pandemic spending, raising the nation's debt limit to $28.5 trillion.

The Congressional Budget Office estimated that the federal government has a deficit of $2.7 trillion for the budget year ending in September 2021. The government also ran up deficits each year from 2016 to 2020.

Technically, the U.S. has already reached its debt limit at the end of July as agreed to in the 2019 budget deal. Once the debt limit is reached, the U.S. cannot borrow more money to pay its bills. But Treasury could and has used "extraordinary measures" like delaying some payments to employees' retirement funds to avoid a default.

Unless Congress acts to raise the debt limit, the Bipartisan Policy Center projects that the U.S. will most likely reach the limit between October 15 and November 4. The center added that a default would likely raise borrowing costs as investors will demand a higher rate of return on U.S. debts. Even a short-term default, it said, could also threaten the country's current economic recovery.

Why does the U.S. have a debt limit?

Before World War I, the U.S. Congress permitted borrowing only for special reasons, such as the building of the Panama Canal. In 1917, Congress passed a law that set a debt limit. It gave Treasury some flexibility in dealing with the national debt to pay for the war.

The U.S. is one of few countries around the world with a debt limit. Denmark is often noted as another developed country with a debt limit. But Denmark often sets its borrowing limit so high that a default is not really possible.

For many years in the U.S., raising the debt limit was not an issue. The Republican Party has since only supported increase while it has controlled the White House. It has argued against raising the limit under Democratic administrations.

Earlier this year, Democratic Congressman Bill Foster of Illinois introduced a bill to end the debt limit. The bill, however, is not guaranteed to pass with the currently divided legislature.

Late on Wednesday, Senate Republican leader Mitch McConnell told Democrats he would permit an emergency debt limit extension into December to avoid a default. If the offer is accepted, the U.S. will have to deal with the debt limit again by the end of the year.

Hai Do wrote this story for VOA Learning English. Susan Shand was the editor.

obligation - n. something that you must do

maximum - n. the highest number that is permitted