< Watch Movie Trailers to Improve Your English
Update Required To play the media you will need to either update your browser to a recent version or update your Flash plugin.
By Alice Bryant
27 July 2021


The 2021 film Infinite centers on character Evan McCauley, who discovers that he has had several past lives. A group of other people with past-life experiences seek his help to find and destroy a device that threatens all life on Earth.

American film storylines have a long tradition of being over the top. But there is something about most of these films that is realistic: the dialogue. American movies can offer some of the most natural examples of spoken American English, including the speed of speech, word choice, expressions, shortened word forms and accents. 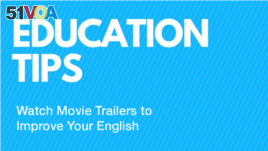 Yet, if you watch one of these films in English, you may find the language difficult to understand. The actors might speak fast, or unclearly.

Captions can help. They are the words of the dialogue that appear on the screen as they are spoken. Fast speech, however, means captions disappear quickly. This can leave you unsure of what an actor has said.

There are some things that may help you with this problem.

Movie trailers are one example. A movie trailer is a short video advertisement for a film. On today's Education Tips, I will explain how these short videos can improve your English.

Though movie trailers are usually just two to three minutes, they can be extremely effective. In watching them, you can sharpen your listening skills while also learning new words and expressions. You can even practice how to say words that are difficult or that you have never heard before.

The best place to find official American movie trailers is on YouTube. YouTube provides a lot of advantages for an English learner. The site is free and contains a countless number of videos in English. But two YouTube technical elements are especially helpful: closed captions and changeable playback settings.

With closed captions, you can read the dialogue as you watch and listen. And with playback settings, you can slow down the speech if someone is talking too fast.

Now, let's talk about steps you can take to get the most out of watching movie trailers:

The first step is to find them. Go to YouTube and do a search for something like this as an example: "official trailer (2021)." Several film trailers will appear and you can choose one that looks interesting. Animated films can be an especially good choice for English practice, no matter your age. These films are usually humorous and relatable. To find animated films, try doing a search for something like: "animated official trailer (2019)" for example.

Make sure the video you choose offers closed captioning, which you will use later. You can find the closed caption mark at the bottom of the video. It may be listed as "CC" or something else. Keep in mind that trailers more than five or seven years old may not offer closed captions on YouTube. So choose newer videos.

Next, watch the video at normal speed without closed captions. Try to understand what the story is about overall. Then, watch it again to seek more details. With this method, you are testing your English skills. It will give you an idea of whether the dialogue is too fast or difficult for your skill level.

Next is step three. Watch the video again, this time with closed captions. Find the CC setting at the bottom of the video and activate the captions. This can help you in several ways. You can confirm whether you understood the dialogue in your first viewings, make clearer any dialogue you did not understand, and connect the sound of words with their spellings. You can also write down a few of the new words in a notebook or on your mobile phone.

After watching with captions, if the actors are still talking too fast, you can take the next step: slow down the playback speed and watch the video again. To change the speed, go to the bottom of the video and click on the settings wheel. Choose "playback settings" and then choose 0.75. Slowing the playback speed not only makes dialogue clearer but also slows how fast the captions appear, making them easier to read. A word of warning however: Movie trailers generally contain music and sound effects. They might sound a little strange at the slower speed.

After you have watched the video at 0.75 speed, you are ready for the final step: Watch the video once more, this time at normal speed without captions. At this point, you will probably notice a huge improvement in your understanding. And you probably will have learned some new words and expressions. Keep a notebook or a note page on your phone to write down a few words and expressions from each trailer you watch.

In your notes, you can also summarize the storyline using some of the language it contained. Later, try using this new language as you speak and write English in your everyday life.

Give this method a try and let us know how it goes. A short movie trailer can offer a good 30 minutes of practice and help sharpen several of your English skills at once.

Alice Bryant wrote this lesson for Learning English. Caty Weaver was the editor.

character – n. a person who appears in a story, book, play, movie, or television show

dialogue – n. the things that are said by the characters in a story, movie, play, etc.

accent – n. a way of pronouncing words that occurs among the people in a particular region or country

practice – v. to do something again and again in order to become better at it

viewing – n. the act of watching or seeing something

spelling – n. the act of forming words from letters