< Warming Rivers in US West Killing Fish, Hurting Fishing Industry
Update Required To play the media you will need to either update your browser to a recent version or update your Flash plugin.
By Susan Shand
01 August 2021


Salmon fishermen on the West Coast of the United States are expressing increasing concern about threats to the fish population. Heat waves and drought, a long period without rain, are raising water temperatures and lowering water levels. The extreme conditions are killing wild fish from Idaho to California.

Hundreds of thousands of young salmon are dying in Northern California's Klamath River. The low water levels fuel the spread of parasites that kill the fish.

A collapse of one year's group of young salmon can have lasting effects on the total population. It can also shorten or stop the fishing season.

Climate change is making the American West hotter and drier. and endangering the salmon fishing industry. The industry is worth about $1.4 billion dollars in California alone.

The falling numbers of wild salmon catches has caused a sharp rise in price for the fish. Fisherman Mike Hudson says people are not able to spend $35 for a pound, about 450 grams, of the fish. Hudson has been catching and selling salmon at farmers markets in Berkeley for 25 years.

Hudson has considered retiring and selling his 12-meter boat because business, in his words, is "going to get worse from here."

Winter-run Chinook salmon are born in the Sacramento River and travel hundreds of miles to the Pacific Ocean. There, they normally spend three years before returning to their birthplace to mate and lay their eggs between April and August. Unlike the autumn-run Chinook that survives almost entirely from hatchery breeding programs, the winter-run is still largely wild. 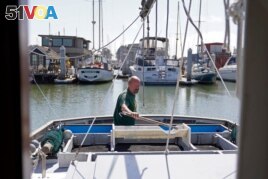 Salmon fisherman Mike Hudson works on the back of his boat at the Berkeley, Calif., Marina on Thursday, July 22, 2021. (AP Photo/Eric Risberg)

Federal fisheries officials predicted in May that more than 80 percent of baby salmon could die because of warmer water in the Sacramento River. Now, state officials say that number could be higher because of a quickly drying cool water in Lake Shasta. The lake is California's largest reservoir. It is filled to only about 35 percent capacity, federal water managers said this week.

"The pain we're going to feel is a few years from now," said John McManus. The executive director of the Golden State Salmon Association, which represents the fishing industry, said that soon there will be no wild, naturally bred salmon in the ocean.

When Lake Shasta was formed in the 1940s, it blocked access to the cool mountain rivers where fish traditionally reproduced.

To ensure the survival of salmon in Lake Shasta, the U.S. government is required to keep river temperatures below 13 Celsius because salmon eggs cannot live in anything warmer.

The warming water is starting to affect older fish, too. Scientists have seen some adult fish dying before they can lay their eggs.

"An extreme set of cascading climate events is pushing us into this crisis situation," said Jordan Traverso, an official with the California Department of Wildlife and Fish.

The West has been struggling with a historic drought and recent heat waves worsened by climate change. Waterways and reservoirs that are used by millions of people and wildlife are affected.

As a result, the state has been moving millions of salmon raised at hatcheries directly to the ocean each year. That way, the fish do not travel through unhealthy waterways. State and federal owned hatcheries take other measures to save the salmon. For example, they keep a genetic bank to stop inbreeding at hatcheries

Fishermen and environmental groups blame water agencies for using too much water for farms.

"We know that climate change is going to make years like this more common," said Sam Mace, a director of Save Our Wild Salmon. The group is working to increase populations of wild salmon and other fish in the Pacific Northwest. She said federal and state agencies should be better prepared to deal with a problem they know is coming.

On the Klamath River near the Oregon border, California wildlife officials decided not to release more than 1 million young Chinook salmon into the wild. Instead, it drove them to hatcheries that could hold them until river conditions improve.

Scientists say the salmon population in California historically has lived through droughts in the past. But the continuing drought could destroy some runs of salmon.

"We're at the point where I'm not sure drought is appropriate term to describe what's happening," said Andrew Rypel, a fish ecologist at the University of California, Davis. He said the West is becoming a low-water environment.

The Associated Press reported this story. Susan Shand adapted it for Learning English. Caty Weaver was the editor.

Words in this Story

evaporate – v. to change from a liquid into a gas

reservoir – n. a usually artificial lake that is used to store a large supply of water for use in people's homes

cascade – v. a large amount of something that flows

appropriate – adj. right or suited for some purpose or situation