< Vocabulary for New Sports at the Tokyo Olympics
Update Required To play the media you will need to either update your browser to a recent version or update your Flash plugin.
By Dr. Jill Robbins
29 July 2021


In the Tokyo Games, there are several "new" Olympic sports: karate, skateboarding, sport climbing, surfing and baseball for men and softball for women.

Baseball and softball are actually not new. The two sports have returned to Tokyo after some years away from the Games.

In this week's lesson, we will look at the verbs and nouns that you hear from broadcasters and read in publications. Hopefully, it will help you understand what they are talking about!

Let us begin with baseball.

A player who starts a game by throwing a baseball is called a "pitcher." The pitcher will throw, or "pitch", to an opposing "batter" who stands at "home plate" ready to hit with a bat.

Dave got a hit in his first at bat. 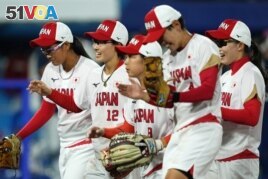 Team Japan shortstop Mana Atsumi (12) celebrates with teammates after an inning ending double play against the United States of America during the sixth inning in the gold medal game of the Tokyo 2020 Olympic Summer Games at Yokohama Baseball Stadium. (Kareem Elgazzar-USA TODAY Sports)

Softball is similar to baseball. But the sport is usually played by women.

On Monday, American player Kelsey Stewart "hit" a softball out of the ballpark for a "homerun" to win the game 2-1. You probably heard the announcer say:

Kelsey Stewart hits a walk-off homerun for the United States.

Well, it is called a "walk-off" when a player scores a "run" at the bottom of the final "inning" to win a game.

However, Japan turned a "double play" in the final game on Tuesday to win the gold medal over the U.S. With two "runners" on first and second bases, an American player hit the ball hard. The ball bounced off a Japanese player and was caught by Mana Atsumi in the air for the first "out." Atsumi then threw the ball to second base to get the second "out" for a "double play."

There are two different karate competitions in Tokyo called "kata" and "kumite."

"Kata" is a one-person event in which competitors perform offensive and defensive movements against a virtual opponent. Judges award points based on strength, speed, rhythm and balance.

In "kumite", two competitors fight for three minutes or until one has collected eight more points than the other. A punch to the head or body scores one point; a kick to the body gets two points; and a high kick to the head gains three. You may hear this while watching a fight:

The Czech karateka landed a punch to the head, scoring a "yuko."

"Karateka" is Japanese word for a karate competitor. And you should know what "yuko" is. 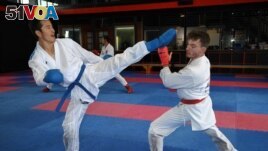 This picture taken on May 11, 2021 shows Afghan-born refugee and karate competitor Asif Sultani (L) training on the outskirts of Sydney as he competes for a place on the Refugee Olympic Team at the...

Have you ever tried skateboarding? There are two kinds of competition – "street" and "park."

In the "park" event, skateboarders launch themselves into the air from an area that looks like an empty swimming pool. They receive points for performing "tricks" like jumping and turning in the air. In "street" skateboarding, competitors perform "tricks" on things you might find on a street, such as stairs, benches and railings.

This is one sport that definitely attracts younger people to the games. Two 13-year-olds, Momiji Nishiya of Japan and Rayssa Leal of Brazil, won the gold and silver for "street" skateboarding earlier this week.

As Nishiya skated to the gold on Monday, you might have heard the announcer say:

If she can put down one of her signature tricks, front-side crook -- she does it! -- massive score coming her way! 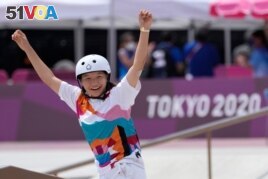 Sport climbing is a new sport to the Olympics. There are three things each climber must do: "speed, bouldering and lead."

In "speed," two climbers go up a 15-meter high wall. The men's winner usually makes the climb within five or six seconds. In "bouldering," competitors climb several fixed routes on a 4.5 meter wall within 4 minutes. In the "lead" event, climbers attempt to move up as high as possible on a wall measuring over 15 meters in height within six minutes.

Scores from all three events are gathered to get a final result. When a climber reaches the top of the wall, you might hear an announcer say:

Surfing competition took place in the ocean, where athletes had to deal with waves, wind direction and the changing conditions of nature.

In the Tokyo Games, each surfer is given about 30 minutes to ride up to 25 waves. A surfer performs a range of difficult movements on the waves, each with its special name. One of the turns is called the "cutback." It returns the surfer to an earlier position on the wave. The surfer "attacks" a wave and then "drops" into it. Here is how an announcer spoke about the surfing of American gold medal winner Carissa Moore:

We hope you enjoy watching all of the Olympic games this year and feel more confident as you talk about these new sports in English.

Dr. Jill Robbins wrote this lesson for Learning English. Hai Do and Susan Shand were the editors.

bat – n. a long rounded stick that is used to hit the ball in baseball

score – v. to get points, goals, runs, or the like in a game or contest

bounce – v. to move in one direction, hit a surface (such as a wall or the floor), and then quickly move in a different and usually opposite direction

virtual – adj. very close to being something without actually being it

punch – n. a quick hit with your fist

swimming pool – n. a large structure that is filled with water and that is used for swimming

signature – adj. closely associated with someone or something or making a person or thing easy to recognize

arc – v. to move or lie in a curving path

What do you think of the new Olympic sports? Can you talk about them easily? We want to hear from you. Write to us in the Comments Section.