< Vermont Artist Walks Nation’s Oldest Hiking Path, Paints Along the Way
Update Required To play the media you will need to either update your browser to a recent version or update your Flash plugin.
By Ashley Thompson
23 October 2020


Rob Mullen is walking the whole length of the northeastern state of Vermont and painting what he sees along the way.

So far, Mullen has walked over 300 kilometers on the Long Trail, what Vermont calls America's oldest long-distance path. Recently, he had only five kilometers to go before he could meet his wife and father for a break and supplies.

It was raining, but he kept dry with his special clothing and equipment as he walked down the trail. The leaves on the trees were showing their autumn colors of orange and yellow. He carried walking sticks and a large blue bag on his back. Inside his bag were his painting supplies. 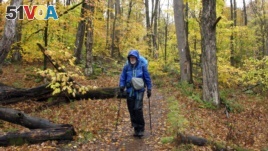 Artist Rob Mullen walks down Long Trail, the country's oldest long distance trail, in Manchester, Vt., on Tuesday, Oct. 13, 2020. Mullen was nearing the end of his 272-mile month-long hike down the length of Vermont, painting along the way. (AP Photo/Lisa

Mullen is a 64-year-old wildlife and wilderness artist. He is in the middle of hiking the Long Trail, which stretches 440 kilometers. The path runs from Vermont's border with Canada to the Massachusetts state line. During his trip, Mullen has been making art. He paints the things he sees.

He told The Associated Press that his experience on the trail has brought him a sense of hope about the country.

"I'll be painting from this trip for a long time," he said during a recent break from walking.

Mullen has done many wilderness boat trips in Alaska and Canada in the past. This year, he had planned to boat in the Northwest Territories of Canada. But then the coronavirus pandemic hit. Canada's border remains closed to Americans.

Mullen was able to fulfill his plan to hike a set distance and then paint a painting on the first day on the trail. He got to a shelter at around 4 p.m., painted a piece of art, cooked a meal and went to bed, he said.

But the trail soon got difficult for him. He admitted he had not trained enough, which slowed his speed.

"I mean I was really suffering," he said. He left his painting kit with his wife temporarily, so he could carry less weight. But he did not give up. As he continued, he gained strength and got back his painting supplies. At times, he said the beauty around him took his breath away.

His wife, Bonnie Rowell, meets up with him every five days to resupply him with food.

Along the way, Mullen has met many hikers who are either walking the Appalachian Trail from Georgia to Maine or, like himself, Vermont's Long Trail. The hikers share shelters for the night or talk to each other on the trail.

"You get these ephemeral friendships," he said of the connections he made with strangers along the way. "Ephemeral" means lasting for a very short time.

The hikers take care of one another. They share equipment and help fix what is broken. When two hikers were low on fuel on a recent night, another hiker loaned them a fuel canister, Mullen said. People who are called trail angels leave water at road crossings and other places for hikers.

Mullen's month-long hike has also been a break from the political debate going on in the United States, he said. He has not heard a political discussion in weeks.

He said it gives him hope that the apparent disagreement "...when you're watching the news doesn't go that deeply into the populace maybe, at least not in many of them," he said. "So it was encouraging for me."

The Associated Press reported this story. Ashley Thompson adapted it for VOA Learning English. Mario Ritter, Jr. was the editor.

pandemic – n. a contagious illness that affects many countries

canister –n. a container with a lid that is used for keeping dry products

angel –n. a person who is very good and kind

populace –n. the people who live in a country or part of a country