< US Troop Withdrawal Will Leave Questions for Afghanistan
Update Required To play the media you will need to either update your browser to a recent version or update your Flash plugin.
By Susan Shand
15 April 2021


This week, the administration of President Joe Biden announced an unconditional troop withdrawal from Afghanistan by September 11. Some experts say the move could take away power from both Taliban rebels and the Afghan government. It might even force them into a peace deal.

The Taliban and Afghan government have been refusing to move toward a power-sharing deal. The Taliban continues its violence. And the Afghan president refuses to negotiate unless he is guaranteed the presidency.

With its announcement, the United States is making it clear that U.S. troops are leaving, no matter what happens in the country. 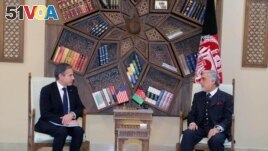 Biden announced Wednesday that the 2,500 US troops in Afghanistan will depart by the 20th anniversary of the September 11 terrorist attacks that led to the U.S. action in 2001.

U.S. Secretary of State Antony Blinken made an unannounced visit to Afghanistan on Thursday. He is there to talk to Afghan leaders, and the Afghan people, about Biden's decision.

"I wanted to demonstrate with my visit the ongoing to commitment of the United States to the Islamic Republic and the people of Afghanistan," Blinken said. He was with Afghan President Ashraf Ghani at the presidential palace in Kabul.

Still, there are growing fears that Afghanistan will collapse into civil war, or worse, after U.S. troops leave.

Already, violence has increased since former U.S. President Donald Trump's administration reached an agreement with the Taliban in February 2020. In that agreement, the U.S. promised to withdraw by May 1.

The U.N. Assistance Mission in Afghanistan reports that more than 1,700 civilians were killed or wounded in attacks in the first three months of 2021. That is an increase of 23 percent from the same period last year.

On Wednesday, the Biden administration announced new rules for the withdrawal. It said it would begin pulling out its remaining 2,500 troops on May 1 and complete the withdrawal by September 11. NATO announced it would also begin a withdrawal of nearly 10,000 troops from the country.

The Biden Administration appears to believe it can deal with Afghanistan from outside the country. The aim is to ensure that the country will never again become a home for terrorists that attack the United States.

The U.S. continues to hope for a peace deal in the country. It is pushing the Taliban and the Afghan government to reach a peace agreement during an April 24 to May 4 conference in Turkey.

However, it is not clear if the Taliban will attend.

After Biden's announcement, the Taliban said it would not attend any conference on Afghanistan's future while foreign troops are still in the country.

A Taliban spokesman, Zabihullah Mujahid, said that if the earlier May 1 deadline is not met, "problems will be compounded."

The Taliban control about half of Afghanistan. But they need a peace deal to be recognized internationally, something they are seeking.

The United States has warned that the Taliban will not get that recognition if they are not part of a new government. The conference in Turkey lends international support to that warning.

The largest barrier to peace, however, may be the great hatred between the Taliban and Afghan President Ashraf Ghani.

Ghani has promised to seek peace. He placed a message on Twitter late Wednesday that he had spoken with President Biden and "we will work with our U.S. partners to ensure a smooth transition."

Earlier, Ghani had proposed a peace deal that called for him to head a temporary government until new elections could be held. The Taliban rejected the idea, as did many Afghan politicians.

Ghani's government has been denounced for corruption and politics that divides people. He has permitted armed leaders throughout Afghanistan to get rich and build large militias.

Afghans say the U.S. and NATO troop presence has kept these warlords from fighting each other. Controlling militias will be even harder if Afghanistan's government fails.

Michael Kugelman is the deputy director of the Asia Program at the U.S.-based Wilson Center. He said: "The best hope is that the peace process won't be dead."

commitment – n. a promise to do or give something

compound – v. to make something worse; to add to

ensure – v. to make sure something happens

transition – n. a change from one state to another