< US Supreme Court Enters Culture Wars with Abortion, Gun Cases
Update Required To play the media you will need to either update your browser to a recent version or update your Flash plugin.
By Dan Novak
27 May 2021


The U.S. Supreme Court is placing itself in the middle of the culture wars in America.

Over the next year, the nation's highest court will hear cases on the divisive issues of abortion and gun rights. The decisions will have far-reaching impacts on American life.

With three justices named by former President Donald Trump on the nine-member court, conservatives now have a five-justice majority without the vote of Chief Justice John Roberts.

Kent Greenfield is a law professor at Boston College. He said the Trump-appointed justices represent "not only a shift of ideology but a shift of power. There are five justices to right of Roberts." He told The Associated Press, "What that means is that the chief is not in control of the court anymore."

Last week, the court agreed to review Mississippi's law banning abortion after 15 weeks of pregnancy. At least 12 other states have passed similar laws, with the hope it would be legally challenged and brought before the Supreme Court. Just on Wednesday, Texas Gov. Greg Abbott signed a law banning abortions once a fetal heartbeat is discovered. Heartbeats in fetuses can be found as early as six weeks before a woman knows she is pregnant.

If the Mississippi law were upheld, it would all but overturn the 1973 Roe v. Wade decision that legalized abortions nationwide.

Carrie Severino is head of the Judicial Crisis Network. The organization spent tens of millions of dollars supporting the confirmation of Trump's Supreme Court nominees.

She said, "Having Trump's nominees on the court has made a real impact. It's exciting to see a solid majority of the court committed to interpreting the Constitution as it's written." 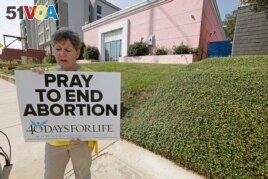 On April 26, the court agreed to hear a case that challenges New York's law that restricts carrying hidden handguns in public. The National Rifle Association, a powerful gun rights organization, is supporting the challenge.

The two cases will be argued and decided during the court's next term, which goes from October to June 2022. A decision to hear a case takes just four votes and is no guarantee of its decision. But on guns and abortion, the Supreme Court with fewer conservative justices passed up many chances to hear similar cases.

The court will likely make its rulings on guns and abortion before next year's mid-term elections that will decide whether the Democrats remain in control of Congress.

Some experts say rulings that favor conservatives may help liberal Democrats in the 2022 elections.

Tom Clark is a political scientist and Supreme Court expert at Emory University. He told the Reuters news agency, "I think the most likely outcome is that the Supreme Court will make conservative decisions in these cases, favored by the political right."

A ruling overturning or weakening Roe v. Wade likely would be viewed as a political decision by the court, Clark said. It could help Democratic candidates win votes from political moderates and women.

He added, "Taking something away from people is more angering than giving them something they've been asking for."

A Reuters/Ipsos poll of American voters last year found that 76 percent of Democrats and 61 percent of independents thought, "abortion should be legal in most cases." That is compared to 40 percent of Republicans.

John Malcolm is a legal expert at the conservative Heritage Foundation. He said the rulings could bring out more conservative voters as well.

"Pro-life conservatives - and there are a lot of them out there - are going to be galvanized to say... we need to elect pro-life legislators," Malcolm said.

Future of the court

The gun and abortion rulings could also be very important to the future of the court itself.

On April 9, President Joe Biden formed a committee to make recommendations for possible changes to the court. The committee will research topics like increasing the number of justices beyond nine or ending lifetime terms for justices. Both reforms could help end the conservative majority.

Liberal activists remain very angry that Trump was able to make three appointments to the high court. One came after the Senate under Republican control blocked former Democratic President Barack Obama's nominee in 2016 from even being considered.

Another came last September, just before the 2020 presidential election. Trump nominated conservative Amy Coney Barrett to the court after the death of liberal Justice Ruth Bader Ginsburg, creating the super-majority.

Trump himself said back in 2016 that if he had three appointments to the court, "Roe would be gone."

abortion — n. a medical procedure used to end a pregnancy and cause the death of the fetus

shift — v. to change or to cause (something) to change to a different opinion, belief, etc.

challenge — v. to say or show that (something) may not be true, correct, or legal

uphold — v. to judge (a legal decision) to be correct : to decide not to change (a verdict)

overturn — v. to decide that (a ruling, decision, etc.) is wrong and change it

interpret — v. to explain the meaning of (something)

affirmative action — n. the practice of improving the educational and job opportunities of members of groups that have not been treated fairly in the past because of their race, sex, etc.