< US States Drop Term ‘Alien’ for Undocumented Immigrants
Update Required To play the media you will need to either update your browser to a recent version or update your Flash plugin.
By Bryan Lynn
01 December 2021

The change was enacted into law in California and Colorado and several other states are considering similar legislation. 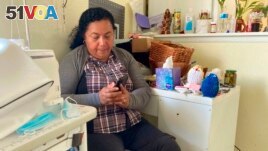 Rosalidia Dardon, 54, looks at a picture of her daughter in El Salvador as she sits in a refugee house in Texas, awaiting asylum or a protected immigration status on Nov. 4, 2021. (Acacia Coronado/Report for America via AP)

Immigrants and immigrant-rights groups say the use of "alien" – especially when combined with "illegal" – is dehumanizing and can have a harmful effect on immigration policy.

In California, Democratic lawmaker Luz Rivas wrote the bill that replaces use of "alien" in state law descriptions with terms such as "noncitizen" or "immigrant."

Rivas told The Associated Press that she remembered as a child seeing the word alien on her mother's residency identification. To the government, it meant her mother was not yet a citizen of the United States. But to her, it meant the family did not belong, even though they were going through the naturalization process.

"I want other children of immigrants, like me, to not feel the same way I did, that my family did, when we saw the word ‘alien'," Rivas said.

The word became the subject of debate in several states earlier this year as the number of migrants at the U.S.-Mexico border grew sharply. Lawmakers in at least seven states have considered removing use of "alien" and "illegal" in state laws, the National Conference of State Legislatures reports.

Colorado is the other state to make the change official. State Senator Julie Gonzales co-wrote the Colorado law. She told a legislative committee words such as "illegal" were "dehumanizing and derogatory." The law removed the term "illegal alien" from a state law used to describe people living in the U.S. illegally.

"That language has been offensive for many people," Gonzales said. "And some of the rationale behind that is really rooted in this idea that a person can certainly commit an illegal act, but no human being themselves is illegal."

The use of "alien" to describe non-U.S. citizens has a long history. It dates back to the nation's first naturalization law, passed by the first U.S. President, George Washington. Fearing a war with France, Congress also passed the Alien and Sedition Acts in 1798, which sought to reduce political subversion.

Moves to stop the word alien have been criticized by some legislators. Sage Naumann is a spokesperson for Colorado's Senate Republicans. He told the AP he does not think most Coloradans or Americans care about "what semi-controversial words are buried" in state laws.

He said the Democratic-controlled legislature should spend its time on matters of deeper importance to citizens, such as measures to fight inflation, reduce crime and improve education.

The federal government has also taken action on the issue. In April, U.S. Customs and Border Protection ordered workers to avoid using the word "alien" in agency documents and public communication. Employees were instructed to use "noncitizen" or "migrant" instead. The term "illegal alien" was also removed and replaced with descriptions such as "undocumented noncitizen."

The acting head of the agency, Troy Miller, said the change was aimed at protecting "the dignity of every individual with whom we interact."

But the head of the U.S. Border Patrol, Rodney Scott, objected to the agency order. He argued that the change went against current language in criminal law. "To change the law is fine, but until then you're really politicizing the mission," Scott said.

The Associated Press reported on this story. Bryan Lynn adapted the report for VOA Learning English. Susan Shand was the editor.

alien – n. someone who does not legally belong to the country where they live or work

residency – n. the state of living in a place

naturalization – n. the act of making someone a legal citizen of a country that they were not born in

rationale – n. the reasons or intentions that cause a particular set of beliefs or actions

mission – n. any work that someone believes it is their duty to do