< US Rural Population Losses Add to Farm Labor Shortages
Update Required To play the media you will need to either update your browser to a recent version or update your Flash plugin.
By Susan Shand
18 August 2021

The losses added to an already severe worker shortage in the country's farming and ranching areas. These industries have called for immigration reforms to help with the problem.

The census information showed that small population gains in many rural areas were driven by increases in Hispanic and Latino residents. Many of them came as immigrants to work on farms or in meatpacking operations or to start their own businesses. 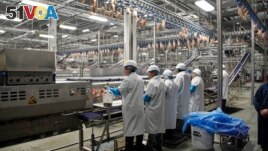 "We've struggled on this issue for a long time to try to come up with a more reasonable, common-sense approach," said John Hansen. He is president of the Nebraska Farmers Union, which is a part of a group asking Congress for new immigration laws.

Vilifying immigrants "just makes it harder to get there," Hansen said.

The population changes are clear in Nebraska, where only 24 of the state's 93 counties gained residents. Of those 24, only eight reported an increase in the white population, suggesting most of the growth was driven by minorities, said David Drozd. He is a researcher with the University of Nebraska Omaha's Center for Public Affairs Research.

Drozd examined the census information and found that Nebraska counties with more non-white immigrants are where most of the meatpacking operations are found.

"In the rural areas, if you didn't have the Latino growth, employers would be struggling even more just to fill those positions," Drozd said.

In New Mexico, populations decreased across 20 rural counties. Because there was a shortage of laborers for the yearly chile harvest, the state promised up to $5 million to increase pay for chile pickers and processors. Pay rates now reach nearly $20 an hour.

Some Republican state legislators blame the lack of laborers on unemployment pay, which, they say, can affect whether a person chooses to work. Democrats see a continuing labor crisis.

The New Mexico Chile Association trade group says the industry has a shortage of about 1,350 seasonal laborers.

The problem is just as bad for chicken farmers in North Carolina, where meat processors support the economies of many rural communities. Half of the state's 100 counties have lost population since 2010, the census information showed.

Bob Ford is executive director of the North Carolina Poultry Federation. He said labor shortages at chicken plants will only worsen as people continue to leave rural communities. Adding to the problem, he said, is the loss of migrant workers going to better paying jobs in other industries, such as building.

Ford said while higher pay for workers and better health care and housing could help, changes to immigration policy would do a lot more to solve the labor shortage problem.

In Kansas, some rural Republicans say Congress needs to find an answer.

Nancy Weeks is secretary of the Haskell County Republican Party in southwestern Kansas. She said if immigrants living in the U.S. illegally want to move to the area and work, they should be given a way to gain legal status "so that they pay taxes like I do."

"I don't have a problem with them coming here as long as they get legal," Weeks said.

ranching – n. the activity or business of raising cattle or other animals on a large farm

approach – n. a way of doing something

vilify – v. to say bad things about someone so that other people will not like of approve of them

county – n. an area of a state or country that is larger than a city and has its own government to deal with local matters

status – n. the current state of something