< US Population Growth Slows Down
Update Required To play the media you will need to either update your browser to a recent version or update your Flash plugin.
By Dan Novak
29 April 2021


The United States population has slowed to its lowest rate since the 1930s, the Census Bureau said Monday.

Every ten years, the Census Bureau counts the country's people. The total U.S. population is now 331,449,281. It is 7.4 percent more than ten years ago, but the second slowest increase ever. Experts say the slow rate is due to an older population, less immigration and the effects of the Great Recession. The 2008 economic crisis led many young adults to wait to get married and have families, which slowed the birthrate.

The only slower growth of the U.S. population growth was in the 1930s, during the Great Depression. The slow rate in the 2010s had a similar start because of the Great Recession and the long recovery that followed.

Demographers do not think population growth will pick up soon, and some believe growth may slow down even more. Americans are getting older — the median age in the U.S. is 38, up one year from 37 in 2010. Immigration had been decreasing, and the pandemic mostly ended it.

William Frey is a demographer with the Brookings Institution in Washington, D.C.

"Unlike the Great Depression, it's part of a process where we're likely to keep having slow growth," Frey said.

A slowing population growth may create problems for the country's future.

John Lettieri is the president of the Economic Innovation Group. He said that the U.S. now has more Americans aged 80 or older than 2 or younger.

"The big demographic advantage the U.S. once enjoyed over other rich nations has evaporated," he wrote in a tweet.

The census is also politically important because the number of congressional seats in each state is decided by its population. The 2020 census data shows that Americans are continuing to move to Republican-run states in the south and west. For now, that gives Republicans a chance to win many seats in the U.S. House and possibly win back control.

Several Republican states have gained congressional seats. Texas, the state with the second-most people, was the biggest winner. It added two congressional seats. Florida and North Carolina each gained one. Colorado, Montana and Oregon all grew in population and gained a seat each. States losing seats included the Democratic states of Illinois, Michigan, and New York. 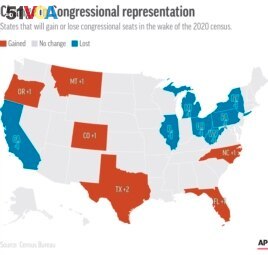 In the long term, however, migration may not be good news for Republicans. Many of the fastest growing states in the south and west are bringing in younger people and minorities, groups that usually vote Democratic.

William Fulton is the director of the Kinder Institute for Urban Research at Rice University in Houston.

He said Texas is becoming the new California—a large state that is adding a lot of people. California still has 10 million more people than Texas, but many are moving. The cost of living in California can be very high, and people are leaving for other western states. That migration helped make Colorado and Nevada Democratic.

"That's the California exodus," Frey said. "Californians are taking their votes and moving to other places."

Mike Schneider and Nicholas Riccardi reported this story for the Associated Press. Dan Novak adapted it for VOA Learning English. Susan Shand was the editor.

demography -n. the study of changes (such as the number of births, deaths, marriages, and illnesses) that occur over a period of time in human populations

median – adj. the middle value in a series of values arranged from smallest to largest

advantage -n. something (such as a good position or condition) that helps to make someone or something better or more likely to succeed than others

evaporate –v. to go away suddenly, to disappear or vanish

exodus –n. a situation in which many people leave a place at the same time — usually singular