< US Migration Program to Reunify Some Minors with Family
Update Required To play the media you will need to either update your browser to a recent version or update your Flash plugin.
By Jonathan Evans
23 June 2021


The U.S. State Department and Department of Homeland Security recently announced the expansion of a program to help some minors from Central America legally enter the U.S.

The Central American Minors (CAM) program permits immigrant parents or legal guardians in the United States to seek their children's resettlement in the U.S. The Biden administration restarted the program in March after a four-year break.

Officials say expansion of the Central American Minors program could make up to 100,000 people eligible to come to the U.S.

How does the program work?

Some minors can be given permission to travel to the country if they are sponsored by a parent or guardian already living legally in the U.S. To be eligible for CAM, the applicant must be unmarried, under 21 and a citizen of El Salvador, Guatemala or Honduras. No money is required to apply. Eligible minors must also complete a security investigation before being brought to the United States.

Miriam Abaya is senior director for immigration and children's rights at First Focus on Children. The group works to support the needs of children and families in federal policy and budget decisions. Abaya says the CAM program involves a multi-step process.

The first step involves the parent completing an application through the refugee resettlement process. Next, there is a process to confirm the child's relationship with the applicant. Then, officials speak with the child to decide whether or not the child is eligible for refugee status or for "parole" in the U.S. 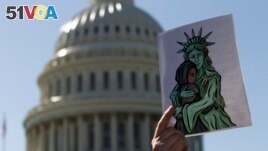 FILE - An activist holds up a pro-refugee image during a demonstration outside of the U.S. Capitol in Washington, Oct. 15, 2019.

What is the difference between refugee status and being paroled in the U.S.?

Being "paroled" is a temporary status that permits a migrant to enter the country but without a path to permanent residency, also known as a green card. By comparison, entering as a refugee can lead to permanent status.

"If you get refugee status, once you arrive in the U.S., you have lawful status so you can adjust to get a green card," Abaya said. She noted that eligibility for refugee status is "very specific" and that many CAM applicants may not be eligible.

"If you get paroled [into the country], then you don't necessarily have [permanent] status in the U.S., but you're permitted to be in the country for a temporary period of time," she said.

What effect has the program had since it began in 2014?

Immigration experts say the program was slow to process applicants from the start. The first minors began arriving in the U.S. in November 2015. That was almost a year after CAM's creation under the administration of former President Barack Obama.

By the end of 2016, more than 10,500 applications were waiting to be processed. That information comes from a report by the Niskanen Center, a public policy research group in Washington, D.C. The U.S. resettled 3,000 minors before stopping the program in 2017 and cancelling the acceptance of 2,700 children who had not yet entered the U.S.

During the Obama administration, parents who had received aid were permitted to apply for their children.

Under the Biden administration's relaunching of the program, a parent or legal guardian in the U.S. who has an undecided asylum or a "U" visa legal case can also file an application. U visas are for victims of some crimes who have assisted U.S. law enforcement investigations.

What has been the reaction to the program's relaunch?

Critics of the program note that it is unlikely to greatly reduce the number of unaccompanied minors crossing the U.S.-Mexico border without permission.

Chuck Grassley is the top Republican on the Senate Judiciary Committee. He said in a statement, "I'm worried that this effort is going to be somehow passed off as an effort to address the number of migrants at the southern border when it does nothing to stem the flow or address the crisis created by this administration."

Immigrant supporters have welcomed the restart of the CAM program. However, they note that eligibility does not cover the full number of family members who may wish to apply to bring a minor to the U.S.

Miriam Abaya said, "It's not just parents and legal guardians that care for children. There are aunts, there's a grandparent who is in the United States, and those family members don't have any way to apply."

eligible – adj. qualified to take part in a program or activity

sponsor – v. to take responsibility and give financial support to another person

application – n. a formal and usually written request for something

adjust – v. to change something slightly so that it works or fits better

unaccompanied – adj. not having anyone with you when you go somewhere

stem – v. to stop something from continuing or increasing