< US Lawmaker Who Was Homeless Fights to Help Others Avoid it
Update Required To play the media you will need to either update your browser to a recent version or update your Flash plugin.
By Jill Robbins
04 August 2021


The administration of U.S. President Joe Biden issued a renewed ban on evictions that will last until October 3. The order will temporarily stop evictions in counties with "substantial and high levels" of coronavirus spread.

Eviction is the process of forcing people or businesses to leave property that they do not own.

The order was given by the U.S. Centers for Disease Control and Prevention and covers areas where an estimated 90 percent of the U.S. population lives.

The eviction ban was an especially important issue to one lawmaker. About 20 years before she was elected to Congress, Representative Cori Bush of Missouri lived in a car with her husband at the time and two young children. The family had been evicted from their rental home.

Bush is a first-term Democrat from the city of St. Louis. To her, the debate over whether to continue the ban on evictions during the coronavirus crisis has been personal.

In a show of support for the measure, she started to sleep outside the Capitol last Friday. She wanted to call attention to the issue as part of the effort to pressure Biden and Congress to act.

Bush's experience sets her apart from members of the different political parties in the capital. She has a direct connection to an urgent problem affecting many Americans.

"I know what it's like to be evicted and have to live out of my car with my two babies," Bush told reporters Saturday. "As long as I am a sitting U.S. congressperson, I will not keep my mouth shut about it."

Bush was a part of a larger push among some lawmakers to stop evictions. Her decision to sleep outside the Capitol got attention. Top congressional leaders and administration officials invited her to meet with them. Reporters asked to speak with her. 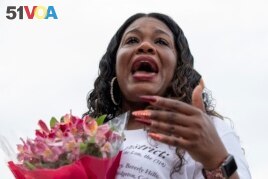 Rep. Cori Bush, D-Mo., cries after it was announced that the Biden administration will enact a targeted nationwide eviction moratorium outside of Capitol Hill in Washington on Tuesday, August 3, 2021.

She met with Senate Majority Leader Chuck Schumer, and had a short talk with Vice President Kamala Harris on Monday. Bush's career in politics has developed quickly. She has gone from leading protests against police in Ferguson, Missouri, to Congress in little more than five years.

House Speaker Nancy Pelosi on Tuesday gave a salute to Bush "for her powerful action to keep people in their homes."

At first, the Biden administration argued it does not have the legal power to continue the ban. A Supreme Court opinion in June said that Congress must pass a bill to do that. But Congress did not and lawmakers left town for their August break.

On Tuesday, before the administration's announcement, Bush said: "Am I supposed to just go home? No, I'm an organizer. I am an activist. So I fell back into what I know how to do."

She has had experiences that led her to become an activist. In 2001, Bush became sick while pregnant with her second child. She had to quit her job at a preschool. The lost income led to their eviction.

For about three months, she and her husband at the time lived out of their car. She said that she was not earning a lot of money at the time. Later, her family, already struggling themselves, was able to help her find a home.

"I don't want anyone else to have to go through what I went through, ever," Bush said tearfully.

Later she legally separated from her husband and Bush went back to school, earning a nursing degree. She also became a religious leader.

Her life changed in 2014. A white police officer shot and killed Michael Brown, a Black man, in the St. Louis area of Ferguson, Missouri. Bush joined thousands of activists in the protests following the shooting. She quickly became a leader of the movement calling for police and criminal justice reform in the St. Louis area. She was back on the streets again three years later after a white St. Louis police officer was found innocent in the shooting death of a Black suspect.

Her activism fueled an interest in politics. She ran unsuccessfully in a 2016 election for the Senate and in 2018 as a Representative for St. Louis. But after George Floyd's death, she gained support from the progressive group Justice Democrats. She won election last November.

Arguing with her own party leaders

Some questioned Bush's decision to go against congressional leadership and the president from her own party. Administration and congressional officials also noted that much of the money Congress had set aside to provide housing assistance has not been given out by the states.

House Majority Whip Jim Clyburn said he was "sensitive" to Bush's goal, but suggested she may be fighting the wrong battle.

"It's not the federal government that's doing it," Clyburn said. "If you've appropriated $46 billion for the country, and only $3 billion has been used, then that's not Congress...It's on whoever has got the money tied up."

After the administration made its announcement, Bush tweeted out a photo of herself sitting with others on the Capitol steps. It said: "Grateful."

Brian Slodysko and Jim Salter reported on this story for the Associated Press. Jill Robbins adapted it for Learning English. Mario Ritter, Jr. was the editor.

county –n. an area of a state or country that is larger than a city and has its own government to deal with local matters

rental –adj. related to renting; paying money to be able to use someone else's property especially to live in an apartment or house that belongs to someone else

evict – n. to force a person or business to leave a place that they do not own

salute – n. to give a sign of respect to (a military officer, flag, or the like) by moving your right hand to your forehead

appropriate – v. to get or save (money) for a specific use or purpose

What do you think of the action Representative Bush took to stop evictions? We want to hear from you. Write to us in the Comments Section.