< US Hospitals Worry as Vaccine Requirements Arrive
Update Required To play the media you will need to either update your browser to a recent version or update your Flash plugin.
By Hai Do
28 September 2021


Hospitals and nursing homes around the United States are worried about possible shortages of workers as deadlines arrive for health care employees to get vaccinated against COVID-19.

The orders take effect this week in states like New York, California, Rhode Island, and Connecticut. Many in the medical industry are concerned that some employees will refuse vaccination and have to be dismissed from their jobs.

"How this is going to play out, we don't know," said California Hospital Association spokesperson Jan Emerson-Shea. She added that the organization fully supports the state's vaccination requirement.

Faced with either getting the COVID-19 vaccine or losing their jobs, thousands of health care workers in New York received at least one shot by Monday's deadline.

Hochul also signed an order that expands the powers of her office to deal with health worker shortages. The measure permits medical professionals from outside New York to work in the state. It also eases restrictions on retirees returning to the workforce and permits the use of telemedicine in nursing homes.

Some New York hospitals prepared for the possible shortage with plans to limit non-critical services and nursing home admissions. 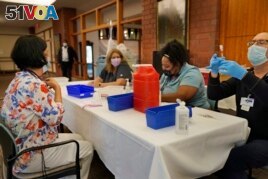 Deadlines coming up in other states

In California, health care workers have until Thursday to get fully vaccinated. Some hospitals are looking at removing or suspending those who refuse to meet the requirements. Emerson-Shea of the California Hospital Association said that many healthcare workers have rejected job offers in the state because of its vaccine requirement.

In Rhode Island, the vaccine requirement takes effect Friday. The state says hospitals may permit unvaccinated employees to work 30 days past the deadline if necessary for patient safety. The requirement is facing legal action because it does not provide religious exception.

In states that do not have vaccine requirements, some hospitals are setting their own.

A North Carolina-based hospital system said this week it had dismissed 175 of its more than 35,000 employees because they refused vaccination.

In Missouri, the Mercy hospital system is requiring vaccinations among health care workers by Thursday. A spokesman said violators will be placed on a 30-day unpaid suspension.

Around the country, the federal government also requires about 17 million workers at health centers that receive federal money to be fully vaccinated. That has worried some hospital officials in rural communities where vaccination rates tend to be lower.

Troy Bruntz is president of the Community Hospital in McCook, Nebraska. He said 25 of the hospital's 330 employees said they would resign if they were required to be vaccinated. Another 100 unvaccinated employees — a group that includes nurses as well as cleaning and support workers — have not made a decision on the requirement.

"It doesn't make us feel too confident that this isn't going to turn into something short of a nightmare for American health care," he said.

Ginger Robertson works in mental health at a hospital in Bismarck, North Dakota. She has requested exception from the hospital's vaccination requirement based on her religious beliefs. She said she will look for other work if she does not get the exception.

"Honestly, I really love my job. I am good at it. I enjoy my patients. I enjoy where I am at," she told the Associated Press. "So," she continued, "this is a really hard place, to have to choose between two things I don't want to do. I don't want to leave, and I don't want to get the vaccine."

She said other nurses are also considering leaving. "We feel demoralized," Robertson said, adding "as though we aren't intelligent enough to make these choices for ourselves."

The Associated Press reported this story. Hai Do adapted the report for Learning English. Caty Weaver was the editor.

nursing home - n. a place where old people or those who cannot take care of themselves can live and receive care

deadline - n. a date or time when something must be finished