< US Employers Step Up Pressure on Unvaccinated People
Update Required To play the media you will need to either update your browser to a recent version or update your Flash plugin.
By Jonathan Evans
03 August 2021


U.S. employers have used information campaigns, extra money and other persuasions to urge their workers to get the COVID-19 vaccine. Now, a growing number are requiring employees to get vaccinated or accept repeated testing.

The federal government, states of California and New York and technology companies Google and Facebook are all demanding vaccinations. Some hospitals, universities, restaurants and entertainment places have also started requiring COVID-19 vaccinations. But the new measures are unlikely to affect many of the millions of unvaccinated Americans.

Many of the companies requiring shots have mostly office workers who are already largely vaccinated and are not willing to work with those who are not.

Some major companies are avoiding vaccination requirements. Food manufacturers and supermarkets, for example, depend on workers who do not earn a lot of money. They are concerned that requirements might drive away employees and worsen labor shortages.

For example, Tyson Foods said about half of its 56,000 employees in the U.S. have received shots after the company held more than 100 vaccination events since February. But the company said it has no plans to require the others to get vaccinated.

Walmart and Amazon are also not requiring their workers who are paid by the hour to get vaccinated. However, Walmart said employees at its headquarters will be required to get vaccinated by October 4.

The federal government is the largest employer in the United States. President Joe Biden announced last week that all federal workers must get vaccinated or they face weekly tests and official travel bans.

The federal government has said it will pay for the costs of the weekly tests. For other employers, insurance companies might pay for testing at some workplaces but not others.

Biden's decision could influence other employers to enact similar rules, said Brian Kropp. He is chief of research at Gartner, a research and advisory company.

Kropp said some companies face difficult considerations that go beyond laws and requirements. Those considerations include deep resistance to vaccines in many states where they operate. 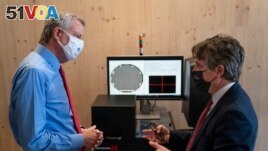 FILE - In this April 28, 2021 file photo, New York Mayor Bill de Blasio, left, speaks with Matthew Putman, co-founder and CEO of Nanotronics, during a facility tour before a ribbon-cutting ceremony to mark the opening of a Nanotronics manufacturing facility.

In studies by Gartner, fewer than 10 percent of employers have said they plan to require all employees to be vaccinated. But that might change because vaccination rates are not increasing and fear of the delta variant of the coronavirus.

In addition, hospitals and retirement homes are increasingly requiring the vaccine. At a hospital system in Houston, Texas, many employees filed a legal case over a vaccination requirement. But a judge dismissed the case, and more than 150 employees who refused to get the COVID-19 vaccine were dismissed or resigned.

Atria Senior Living operates more than 200 retirement living communities across the U.S. The company began to require vaccines for its employees in January.

Alexandra Olson reported on this story for the Associated Press. Jonathan Evans adapted this story for Learning English. Mario Ritter, Jr. was the editor.

entertainment –n. the industry of providing performances, games and fun activities for people; fun or pleasure that comes from watching a performer, playing a game or other fun activity

shop –v. to visit a store where goods are sold to look at and buy things

customer –n. someone who buys goods or services from a business

resident — n. someone who lives in a particular place

staff –n. a group of people who work for an organization or business