< US Builds Case against Oath Keepers Leader Over January 6 Attack
Update Required To play the media you will need to either update your browser to a recent version or update your Flash plugin.
By Dan Novak
10 April 2021


United States government lawyers have charged about half of the 800 rioters who attacked the U.S. Capitol Building on January 6.

Among those charged are 12 members of the Oath Keepers. It is one of the largest anti-government militia groups in the United States. Eight men and four women have been charged with plotting to use force to block President Joe Biden's presidential victory.

Kelly Meggs is one Oath Keeper being charged. Meggs is the head of the Oath Keeper's in Florida. She is accused of planning the attack with the Proud Boys and the Three Percenters, other militia groups.

Grayden Young is another member of the Oath Keepers. He is accused of receiving weapons and military training for himself and others. A third member, Kelly Watkins, is accused of finding people to join the January 6 attack. "I need you fighting-fit by inauguration," she told one person.

The 12 Oath Keepers face five criminal charges, from conspiracy to obstruction of an official government process. The obstruction charge carries a prison sentence of up to 20 years.

One person missing from prosecution is Stewart Rhodes, the leader of the Oath Keepers. Prosecutors appear to be building a conspiracy case against him.

Aitan Goelman is a lawyer and former federal prosecutor. He said the government might not have enough evidence to charge Rhodes.

"So far, they haven't provided any evidence that Rhodes was part of a conspiracy, which is an agreement to storm the Capitol," Goelman said. "Maybe they have that. Maybe that's forthcoming."

Jimmy Gurulé is also a former federal prosecutor. He said the government is slowly building a case against Rhodes. To charge Rhodes with conspiracy, there needs to be evidence he agreed with his followers to carry out the attack. 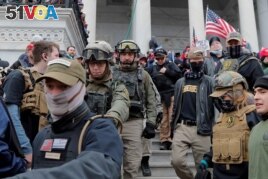 FILE - Jessica Watkins, second from left, and Donovan Crowl, center, both from Ohio, march down the east front steps of the U.S. Capitol with the Oath Keepers militia group among supporters of President Donald Trump in Washington, Jan. 6, 2021.

In recent court documents on the 12 charged Oath Keepers, prosecutors have released communications related to January 6.

Prosecutors have released more details of Rhodes' communications with other members of the Oath Keepers. They made public a 97-second telephone call between Rhodes and Meggs nine minutes before she and other militia groups entered the Capitol. Prosecutors would not give any details of the call, but said it contains "substantial evidence" of a conspiracy to overturn the election.

Additionally, Rhodes took part in online discussions through the Signal app. It is a communications program through which Oath Keepers would secretly talk, or chat, with each other. In one chat, he told his followers what tools to bring on January 6, including flashlights, and safety coverings for their hands and head. He advised them not to bring guns.

Although Rhodes never entered the Capitol building, he messaged orders to his followers through Signal.

"Come to South Side of Capitol on steps," he wrote in one message.

He later posted a photo of the southeast side of the Capitol. He then posted the message, "South side of US Capitol. Patriots pounding on doors(.)"

Around the same time, Meggs and other rioters forced themselves into the building through the building's east side.

He said it shows Rhodes had knowledge of events as they were happening, and was advising his followers on what to do.

At a Republican gathering in Texas last month, Rhodes called the charges against the Oath Keepers and the Proud Boys a "persecution campaign." He said they were at the Capitol to provide security to Trump supporters.

"I might go to jail soon," he said. "Not for anything I actually did, but for made-up crimes."

inauguration –n. a formal ceremony introducing someone, such as a newly elected official, to office

prosecutor- n. - a lawyer who represents the side in a court case that accuses a person of a crime and who tries to prove that the person is guilty

coordinate- v. to make arrangements so that two or more people or groups of people can work together properly and well

conspiracy- n. a secret plan made by two or more people to do something that is harmful or illegal

obstruction n. the act of making it difficult for something to happen or move forward

incriminate- v. to cause (someone) to appear guilty of or responsible for something (such as a crime)

persecute- v. to treat (someone) cruelly or unfairly especially because of race or religious or political beliefs