< US Announces New Economic Measures Against Russia
Update Required To play the media you will need to either update your browser to a recent version or update your Flash plugin.
By Hai Do
15 April 2021


The administration of President Joe Biden announced new economic measures against Russia Thursday. The administration took action to punish Russia for interfering in U.S. elections, stealing information and activities in Afghanistan and Ukraine.

The restrictions represent the first U.S. measures against Russia for the SolarWinds hacking operation. In that incident, Russian hackers are believed to have stolen information from computer networks of at least nine U.S. agencies and several businesses. U.S. officials believe it was an intelligence-gathering operation aimed at stealing government secrets.

The actions announced Thursday include economic measures, or sanctions, on six Russian companies that support the country's hacking activities. The measures target 32 individuals and groups, accusing them of attempting to interfere in last year's presidential election. Eight have ties to Russia's occupation of Crimea. Ten Russian diplomats, including those with ties to intelligence services, are also expelled.

The sanctions target Russia's ability to borrow money by banning U.S. businesses from buying Russian bonds directly from Russia. Other measures are expected as Biden gave an executive order permitting the U.S. government to sanction any part of the Russian economy. 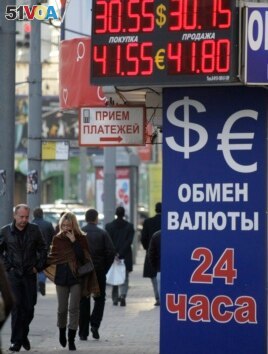 "These actions are intended to hold Russia to account for its reckless actions. We will act firmly in response to Russian actions that cause harm to us or our allies and partners," Secretary of State Antony Blinken said in a statement.

After the sanctions were announced, Russian Foreign Ministry spokeswoman Maria Zakharova warned that Russia will answer the moves. She said the ministry had called in the U.S. ambassador for a "hard conversation," but would not immediately say what action Russia would take.

The Biden administration also said it was using diplomatic, military and intelligence communication lines to deal with reports of Russian activities in Afghanistan. In 2019, Russia reportedly offered money to the Taliban in exchange for killing American troops in the country.

The sanctions send a message to Russia. But they are likely to increase tension in the relationship between the U.S. and Russia.

Earlier this week, Biden asked Russian President Vladimir Putin in a phone call to "de-escalate tensions" following a Russian military buildup on Ukraine's border. He said the United States would "act firmly in defense of its national interests" in relation to Russian activities and election interference.

In a television interview last month, Biden said "I do" when asked if he thought Putin was a "killer." He said the days of the U.S. "rolling over" to Putin have ended.

Putin later recalled Russia's ambassador to the U.S. He also pointed at the U.S. history with slaves and Native Americans and the atomic bombing of Japan ending World War II.

The actions would represent the second major set of sanctions by the Biden administration against Russia. Last month, the U.S. sanctioned seven Russian officials and several government groups for the nerve-agent attack and imprisonment of opposition leader Alexei Navalny.

Hai Do adapted this report for VOA Learning English from AP and Reuters stories. Mario Ritter, Jr. was the editor.

hack –v. to secretly get into computer files or networks in order to get information or to cause damage

reckless –adj. not showing the correct concern about the possible bad results of actions

escalate –n. to make something worse or more severe