< Undocumented Immigrants Losing Homes during Pandemic
Update Required To play the media you will need to either update your browser to a recent version or update your Flash plugin.
By Jill Robbins
08 May 2021


Sotero Cirilo sleeps in a small plastic shelter under a train bridge in Elmhurst, Queens, in New York City.

The 55-year-old immigrant from Mexico once made $800 per week at two New York restaurants. But they closed when the COVID-19 pandemic started. A few months later, he could not pay the rent for his room.

"I never thought I would end up like this, like I am today," he said in Spanish.

Cirilo mainly speaks a Central American language called Tlapanec. He is part of a growing number of undocumented immigrants who are losing the necessary resources to survive because of the coronavirus pandemic. They worked in hard-hit industries, such as restaurants, hotels and construction. The lack of income has made it harder for them to pay for food and housing, pushing some into homelessness. 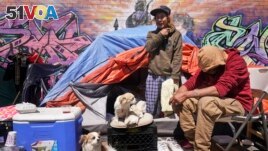 Lucio Lopez, left, talks with friends as he stands in a tent that is part of a homeless encampment in the Queens borough of New York, Tuesday, April 13, 2021.

The Migration Policy Institute compared jobless rates for Hispanic immigrants between January 2020 and February 2021. In one year, the number of immigrants without jobs doubled. Activists and social workers in states like New York or California say the undocumented immigrants who cannot receive government aid are finding themselves without a home.

Yessenia Benitez is a 30-year-old social worker who helps immigrants in Queens, NY. She says she has seen more and more groups of immigrants living on the street. They earn small payments from returning empty bottles, but they would rather be working.

"They want to contribute to society. And before the pandemic, they were contributing to society, some of them were paying taxes," Benitez said.

Jorge-Mario Cabrera is the spokesman for The Coalition for Humane Immigrant Rights, which operates a phone-in service to help immigrants in Los Angeles.

"We have seen an increase in calls from individuals living in the street, living in cars, living in garages or often living with friends in already overcrowded conditions," Cabrera said.

"They don't even have money to pay for their phone bills. This is why we are saying that one of the side effects of the COVID-19 (pandemic) is in fact a complete unraveling of the safety net for undocumented immigrants," he added. "While other communities are receiving (financial) assistance, immigrants are receiving nothing, most of the time."

Cabrera said many of the immigrants contacting the organization are still working, but their income has sharply decreased.

Alfredo Martinez is a 38-year-old Mexican immigrant who currently lives on the street in New York. He used to work in construction but his hours were cut when the pandemic started. Without regular income, he has been living on the street for four months.

Martinez now works some days as a laborer and is hoping to save enough to pay for a room. He wants to take a training course to have more dependable construction employment.

"The pandemic started and my world came crashing down," Martinez said. "This is the first time something like this happens to me. But I think it is temporary. I hope it is temporary."

A recent New York City report estimated there are about 476,000 undocumented immigrants in the city. The report by the Mayor's Office of Immigrant Affairs found that 60 percent of undocumented workers have already lost their job or are at risk of losing it during the pandemic. That compares to about 36 percent of all workers.

Help from cities and states

Some cities and states have begun to help immigrants who cannot receive federal assistance.

California gave some money to undocumented immigrants last year and New York lawmakers recently set aside $2.1 billion to aid undocumented workers who lost jobs or income during the pandemic. New York's program is the largest of its kind in the U.S.

In Arizona, activist groups say immigrant women who clean hotel rooms are suffering. Their children are attending school at home, so the mothers cannot leave home for work.

Petra Falcon is executive director of Promise Arizona, a non-profit in Phoenix. She told the story of a woman who started a little shop to sell sweets and soft drinks to earn money. "This one lady ... was selling whatever she could to the people that live in the apartment complex so she could make enough money to pay rent," Falcon said.

Cirilo, the 55-year-old Mexican experiencing homelessness in Elhmurst, said he hopes to move back to his native country one day. "My children have asked me to go back," he said. "But I can't go back like this."

Claudia Torrens wrote this story for the Associated Press. Jill Robbins adapted it for Learning English. Bryan Lynn was the editor.

rent – n. the amount of money a person pays to live in a building that some else owns

contribute – v. to give something (such as time or money) as a part or share

garage – n. a building or part of a building where people can keep a car, truck, or other vehicle

unravel – v. to fail or begin to fail

safety net – expression. something that helps someone who is in a difficult situation

What is the situation of undocumented workers where you live?