< UN Warns of Rising Temperatures Closer to Paris Agreement Limits
Update Required To play the media you will need to either update your browser to a recent version or update your Flash plugin.
By Bryan Lynn
03 June 2021


The United Nations says there is a 40 percent chance that world temperatures in the next five years will temporarily rise above climate change goals set in the 2015 Paris Agreement.

The prediction comes from a new report produced by the U.N.'s World Meteorological Organization (WMO). The estimate does not mean the world would already be crossing the Paris Agreement's long-term warming limit of 1.5 degrees Celsius above pre-industrial levels. That is because the U.N. target looks at temperatures over a 30-year average, not a single year.

The WMO's Secretary-General, Petteri Taalas, said the latest prediction demonstrates that "we are getting measurably and inexorably closer" to the Paris temperature limit. He described the study as "yet another wakeup call" to seek major cuts in human caused greenhouse gases. 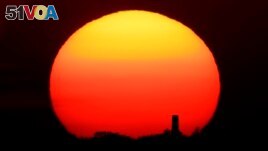 In this Friday, June 26, 2020 file photo, the sun sets behind a smokestack in the distance in Kansas City, Missouri. (AP Photo/Charlie Riedel, File)

The 2015 Paris Agreement sets a goal of keeping temperatures to a few tenths of a degree warmer from now. The world is already 1.2 degrees Celsius warmer than pre-industrial times.

The new report predicts that nearly all areas of the world are likely to be warmer in the next five years than in the recent past.

The WMO also estimated there was a 90 percent chance the world will set another record for the hottest year by the end of 2025. And, the organization predicts the Atlantic ocean will continue to produce more powerful hurricanes than it used to.

For this year, WMO experts say large parts of land in the Northern Hemisphere will be 0.8 degrees Celsius warmer than in recent decades. A drought in the U.S. Southwest is also expected to continue.

Last year, the WMO predicted a 20 percent chance that world temperatures would temporarily rise above the Paris targets.

The doubled prediction this year is related to improvements in technology that suggest the world has "actually warmed more than we thought already," said Leon Hermanson. He is a climate scientist at Britain's Met Center who helped set the WMO's predictions.

"It's a warning that we need to take strong action," Hermanson told The Associated Press.

Pennsylvania State University climate scientist Michael Mann, who was not part of the report, said he is "almost certain" the world will top the Paris warming limit at least once in the next few years.

But, he said one or two years above 1.5 degrees Celsius is not as concerning as when the overall direction of temperatures stays above that level. Mann said that probably will not happen for decades and could still be prevented.

The Associated Press and Reuters reported on this story. Bryan Lynn adapted the reports for VOA Learning English. Hai Do was the editor.

inexorable – adj. continuing without any possibility of being stopped

certain – adj. completely sure of something