< UN Nuclear Chief Warns about Ukrainian Nuclear Center
Update Required To play the media you will need to either update your browser to a recent version or update your Flash plugin.
By Mario Ritter Jr.
03 August 2022


The United Nations nuclear chief has warned that Europe's largest nuclear power center is, in his words, "completely out of control."

Director General of the International Atomic Energy Agency (IAEA), Rafael Grossi, made the comment to the Associated Press (AP) Tuesday. Grossi said the situation at the Zaporizhzhia plant in southern Ukraine is getting more dangerous every day.

He said, "Every principle of nuclear safety has been violated" at the nuclear production center. 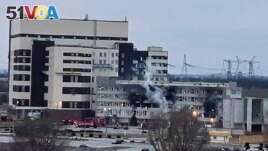 FILE - In this handout photo, a fire is seen at the Zaporizhzhia nuclear plant - the largest in Europe - after it was attracted by Russian forces early on Friday morning Energodar, Ukraine, March 4, 2022. (National Nuclear Energy Generation Company Energoatom via AP)

Russia seized the plant soon after it started its invasion of Ukraine on February 24.

Grossi said the physical integrity of the plant has not been respected. At the beginning of the war, the center was shelled and both sides accuse each other of attacking it.

He also called the situation "paradoxical" because the plant continues to operate with Ukrainian workers although Russia controls it. Grossi added that contact between the IAEA and the workers was "faulty" and "patchy," meaning incomplete.

In addition, supply lines for equipment and parts had been interrupted. So, it is unclear if "the plant is getting all it needs," said Grossi. He added that the IAEA needs to perform some very important inspections to make sure nuclear material is being safeguarded.

The Russian capture of Zaporizhzhia raised fears that the center with 15 nuclear reactors could be damaged. The fear was of another nuclear disaster like the one that took place in Ukraine's Chernobyl plant in 1986. That was the world's most severe nuclear accident.

Russian forces also seized Chernobyl at the beginning of the war but handed control back to Ukrainians at the end of March. Grossi visited on April 27 saying IAEA assistance had been "very, very successful so far."

The IAEA leader said he and his team need protection to get to Zaporizhzhia and cooperation from Russia and Ukraine. He also said the agency's visit would ease conflict. "The IAEA, by its presence, will be a deterrent to any act of violence against this nuclear power plant," he said.

On Monday, Grossi spoke at an event marking the 50-year-old Nuclear Nonproliferation Treaty aimed at preventing the spread of nuclear weapons. The Argentinian diplomat also spoke about the 2015 nuclear deal between Iran and major world powers. He said the negotiations were "complex" but "not impossible."

He added that some IAEA inspections of Iran's nuclear program would continue without an agreement. But he noted that cooperating with the IAEA would help Iran "build trust and confidence."

Grossi also said that the nuclear submarine deal between the United States, Britain and Australia would require an agreement with the IAEA to make sure no nuclear material is lost.

integrity –n. the quality of being complete and whole

paradoxical –adj. made up of two opposite things

confidence –n. the feeling or belief that someone or some group is good or able to succeed at something