< UN: More Women, Children Killed in Afghan Fighting
Update Required To play the media you will need to either update your browser to a recent version or update your Flash plugin.
By Jill Robbins
27 July 2021

The U.N. Afghanistan Protection of Civilians in Armed Conflict office produces such a report every six months. It said, in all, there were 1,659 civilians killed and 3,254 wounded. That was a 47 percent increase compared with the same period last year.

Deborah Lyons is the U.N. secretary-general's special representative for Afghanistan. She asked the Taliban and Afghan leaders to pay closer attention to the current path of the war and its terrible effects on civilians.

Children nearly a third of all civilian casualties

Taliban rebels have quickly captured more territory in recent weeks. They took control of border crossings with several neighboring countries and threaten a number of area capitals. The gains come as the last U.S. and NATO soldiers leave Afghanistan.

The report says there was an especially sharp rise in casualties since May 1, when international military forces began withdrawing. That operation is more than 95 percent complete. All US-NATO forces are to be out of the country by August 31.

Taliban leaders have said they do not want to take total control of the country. But, they say there will not be peace in Afghanistan until they have a place in a new government and President Ashraf Ghani is ousted.

'Stop the Afghan against Afghan fighting'

Lyons, the U.N. representative, also heads the U.N. mission in Afghanistan. She called on the Taliban and Afghan leaders to make greater efforts at the negotiations. "Stop the Afghan against Afghan fighting. Protect the Afghan people and give them hope for a better future," she said.

The U.N. report warned that Afghanistan is headed toward its highest number of yearly civilian casualties since 2009. It noted that much of the fighting during the months of May and June took place outside cities, in areas with comparatively low population levels.

"The pursuit of a military solution will only increase the suffering of the Afghan people," the report said. 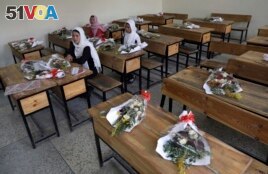 FILE-in this May 16, 2021 file photo, Schoolgirls sit inside a classroom with bouquets of flowers on empty desks as a tribute to those killed in the brutal May 8 bombing of the Syed Al-Shahda girls school, in Kabul, Afghanistan.

More than 300 civilians were killed or wounded in one attack at the Sayed ul-Shuhuda school in Kabul. The attack took place in the second half of the school day, when the school is attended by females only. Girls represent most of the more than 300 civilian casualties, including the 85 students killed. No one has claimed responsibility for that attack, the report said. But the Taliban opposes the education of females.

Rahim Faiez wrote this story for the Associated Press. Jill Robbins adapted it for Learning English. Caty Weaver was the editor.

casualty – n. a person who is hurt or killed during an accident, war, or the like

pursuit – n. attempt to find, achieve, or get something

What do you think of the attacks on civilians in Afghanistan? We want to hear from you. Write to us in the Comments Section.