< UN Agency: Weather Disasters Becoming More Common and Costly
Update Required To play the media you will need to either update your browser to a recent version or update your Flash plugin.
By Ashley Thompson
01 September 2021


The number of disasters driven by climate change, such as floods and heatwaves, have increased by five times over the past 50 years. Such disasters have killed more than 2 million people and cost governments $3.64 trillion since 1979.

The World Meteorological Organization (WMO) says its "Atlas" is the most complete examination ever of death and economic losses from weather, water and climate extremes. 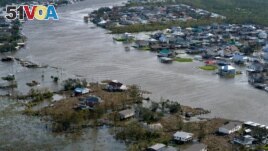 The agency looked at about 11,000 disasters that took place between 1970-2019. They included major catastrophes such as Ethiopia's period of extreme dry weather in 1983. The drought killed more than 300,000 people and was the single most deadly event the WMO looked at. Also included was Hurricane Katrina, which struck the United States in 2005. That disaster was the most costly included in the report, with losses of $163.6 billion.

The agency said the growing number of major disasters was due to both climate change and improved disaster reporting.

WMO Secretary-General Petteri Taalas told reporters Wednesday: "Thanks to our early warning service improvement we have been able to have a decrease of the casualties at these kind of events, but the bad news is that the economic losses have been growing very rapidly and this growth is supposed to continue."

The report's findings add to evidence that extreme weather events are becoming more common due to climate change.

While disasters became more costly and common, the yearly death toll has fallen from more than 50,000 in the 1970s to around 18,000 in the 2010s. Such findings suggest that better planning efforts are working.

The WMO hopes the report will be used to help governments develop policies to better protect people.

More than 91 percent of the 2 million deaths occurred in developing countries, the report said. The report noted that only half of the WMO's 193 members have complex early warning systems.

Mami Mizutori is head of the U.N. office for disaster risk reduction. She urged the world's major economies to help hard-hit developing countries pay for warning systems and risk modeling.

The Reuters news agency reported this story. Ashley Thompson adapted it for VOA Learning English. Susan Shand was the editor.

hurricane - n. an extremely large, powerful, and destructive storm with very strong winds that occurs especially in the western part of the Atlantic Ocean

casualty -n. a person who is hurt or killed during an accident, war, etc.

death toll -n. the number of people who are killed or injured in an accident, disaster, war, etc. — usually singular