< U.S. Sanctions Reimposed on Iran
Update Required To play the media you will need to either update your browser to a recent version or update your Flash plugin.
By VOA
Aug 10, 2018


As promised, President Donald Trump has re-imposed a series of U.S. nuclear-related sanctions on Iran that had been lifted under the nuclear deal, known as the Joint Comprehensive Plan of Action.

After the U.S. ceased its participation in the deal in May and a wind-down period of 90 days ended, sanctions went into effect August 7 targeting, among other things, Iran's purchase or acquisition of U.S. bank notes; its automotive industry, and transactions related to Iran's currency, the rial. 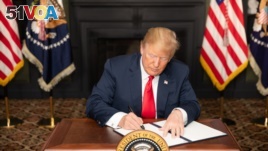 All remaining U.S. nuclear-related sanctions, including those targeting Iran's energy sector and transactions by foreign financial institutions with the Central Bank of Iran, will be re-imposed on November 5, 2018.

In a written statement President Trump said, “The United States is fully committed to enforcing all of our sanctions, and we will work closely with nations conducting business with Iran to ensure complete compliance. Individuals or entities that fail to wind down activities with Iran risk severe consequences.”

President Trump welcomed the decisions by many international firms to leave the Iranian market, and noted that several countries have indicated they will end the imports of Iranian oil. “We urge all nations,” he said, “to take such steps to make clear that the Iranian regime faces a choice: either change its threatening, destabilizing behavior and reintegrate with the global economy, or continue down a path of economic isolation.”

U.S. officials have noted that the revenue Iran received because of sanctions relief under the nuclear deal was used to spread terrorism and instability from Syria, to Yemen, to Gaza and beyond, instead of being used to improve the lives of the Iranian people.

In his statement, President Trump emphasized that while the United States continues to apply maximum economic pressure on the Iranian regime so that it changes its destructive policies, he remains “open to reaching a more comprehensive deal that addresses the full range of the regime's malign activities, including its ballistic missile program and its support for terrorism.”

In addition, President Trump stressed continued support for the Iranian people “who are the rightful heirs to Iran's rich heritage and the real victims of the regime's policies. We look forward to the day,” he said, “when the people of Iran, and all people across the region, can prosper together in safety and peace.”