< U.S. Condemns Political Violence in Venezuela
Update Required To play the media you will need to either update your browser to a recent version or update your Flash plugin.
By VOA
Aug 24, 2018


On August 4, explosives aboard two drones flying near Venezuelan President Nicolás Maduro as he spoke in Caracas were detonated. Seven people were injured. Maduro has used the incident as a pretext to crack down on Venezuela's opposition by unleashing the regime's secret police.

State Department Spokesperson Heather Nauert said, “The United States condemns the political violence that occurred on August 4 and urges the Maduro regime to respect the rule of law, exercise restraint, and safeguard the presumption of innocence for all accused.”

The Venezuelan government's response to this incident has been to arbitrarily detain some individuals and a failure to follow due process. In addition, there have been violations of parliamentary immunity, which is protected by Venezuela's constitution. The United States condemns the alleged use of torture to elicit confessions. 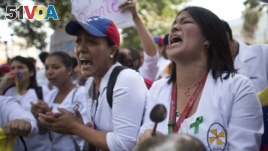 Nurses shout slogans during a protest against the government of President Nicolas Maduro, in Caracas, Venezuela, Aug. 16, 2018.

Ms. Nauert said, “We join the international community in calling for an independent expert commission to investigate the August 4 incident. We urge the Maduro regime to respect the human rights of all persons detained in Venezuela and reiterate our call for the immediate release of all those who are arbitrarily detained, including political prisoners.”

The government of Venezuela is responsible for the widespread instability and suffering in Venezuela. The Maduro regime has systematically stripped millions of Venezuelans of their basic rights as citizens and limited their access to food, medical care, and basic security, said Ms. Nauert. “We encourage the Maduro regime to accept international assistance and pursue policies that alleviate the humanitarian crisis and restore democratic freedoms.”

The United States stands with the Venezuelan people in their dream of living free in a prosperous and democratic country.