< Two Drugmakers to Develop Vaccines Targeting COVID-19 Variants
Update Required To play the media you will need to either update your browser to a recent version or update your Flash plugin.
By John Russell
08 February 2021


British drugmaker GlaxoSmithKline (GSK) says it will team up with a German company to develop new vaccines to target variants of the new coronavirus.

The announcement comes as concern grows that some changes, or mutations, in the virus that causes COVID-19 are making the health crisis harder to fight. 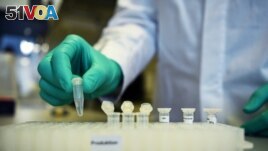 GSK plans to invest $181 million to support research efforts of Germany's CureVac, which is developing vaccines that use messenger RNA, or mRNA, to attack the virus.

GSK said it will also help make up to 100 million doses of the company's existing COVID-19 vaccine candidate this year.

In a recent statement, the companies said there is a need to increase efforts against new variants "to keep one step ahead of the pandemic."

The announcement comes as public health officials around the world raise concerns about new virus variants that may spread faster or resist existing vaccines.

While viruses continually change, most of the changes cause little concern. But scientists are closely following new mutations in an effort to quickly identify new variants that might cause problems.

Officials in England are carrying out special coronavirus testing in targeted communities. The move is aimed at stopping a new variant before it spreads widely and hurts a nationwide vaccination program. The variant was first identified in South Africa.

The British testing effort, involving about 80,000 people, will center on eight areas where the variant is believed to be spreading. A number of cases were found in people who had no contact with South Africa or anyone who traveled there.

Public health officials are concerned about the variant first identified in South Africa because it contains a mutation of the virus' spike protein. The spike protein is targeted by existing vaccines. The mutation may mean the vaccines offer less protection against the variant.

"We believe that next generation vaccines will be crucial in the continued fight against COVID-19," GSK Chief Executive Emma Walmsley said in the statement. Crucial is a term that means very important.

Walmsley added in the statement, "we [GSK and CureVac] will combine our scientific expertise in mRNA and vaccine development to advance and accelerate the development of new COVID-19 vaccine candidates.''

Danica Kira reported on this story for the Associated Press. John Russell adapted it for Learning English. Bryan Lynn was the editor.

dose – n. the amount of a medicine, drug, or vitamin that is taken at one time

spike protein – n. a kind of protein that protrudes from some viruses