< Turkey’s Erdogan Faces Criticism over Handling of Wildfires
Update Required To play the media you will need to either update your browser to a recent version or update your Flash plugin.
By Dan Novak
03 August 2021


Extremely powerful fires have destroyed villages and forests in Turkey over the past week. Critics have accused President Recep Tayyip Erdogan's government of being slow to act and lacking readiness for large fires.

The fires in Turkey's Turquoise Coast began Wednesday and have been made worse with strong winds and hot temperatures. They have left eight people dead and forced thousands to leave their homes. Some villagers have lost farmland and animals.

Firefighters on Tuesday were still fighting nine fires in the coastal parts of Antalya and Mugla that are popular tourist areas. Other fires were reported in the areas of Adana and Isparta. Officials said 137 fires in 30 provinces have been put out since Wednesday.

A senior Turkish forestry official spoke to The Associated Press about the crisis. He said the forest fires were the worst in Turkey in recent years. He did not know how much land the fires had destroyed or how long it would take to put them out. But he did say that strong winds were restarting fires that had been brought under control. 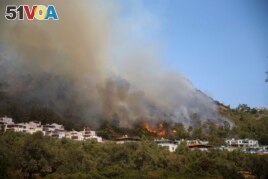 As people lost their homes and land, anger turned toward the government, who admitted they do not have enough firefighting airplanes. Opposition parties have accused the government of failing to buy enough of the planes, and using the money for building projects that hurt the environment.

In the village of Bozalan, homes and farms were burned down. Some people there were very unhappy with the government response.

Thirty-year-old Nevzat Yildirim said he had called officials asking for help but "nothing came."

"We tried to protect our own homes through our own means, by filling up buckets," he said.

Firefighting planes have come from foreign countries including Spain, Croatia, Russia and Iran. A total of 16 planes, 51 helicopters and more than 5,000 workers were fighting the fires, officials said.

Erdogan visited the fire-effected Antalya area over the weekend. But he was criticized for insensitivity after throwing bags of tea at people from his bus.

Officials have started investigations into the cause of the fires. Officials said Kurdish militants could have started the flames. Experts, however, mostly blame climate change as the cause, along with accidents by people.

A heat wave has spread in southern Europe and has led to wildfires across the Mediterranean. Italian firefighters have fought more than 37,000 fires since June 15, a 76 percent increase over last year.

The Turkish weather service said temperatures would rise this week between 4 and 8 degrees Celsius above normal around the country's Aegean and Mediterranean coasts.

Mehmet Guzel and Suzan Fraser reported this story for The Associated Press. Dan Novak adapted it for VOA Learning English. Susan Shand was the editor.

tourist — n. a person who travels to a place for pleasure

means — n. a way of doing something or of achieving a desired result

bucket – n. to force (a person who is not a citizen) to leave a country

insensitive — adj. showing that you do not know or care about the feelings of other people