< True or Real?
Update Required To play the media you will need to either update your browser to a recent version or update your Flash plugin.
By Alice Bryant
20 August 2021


This week on Ask a Teacher, we answer a question from an English learner in South Korea who recently began using our website. The reader says:

Dear VOA, I want to know the difference between "true" and "real." Would you tell me? Thank you very much. 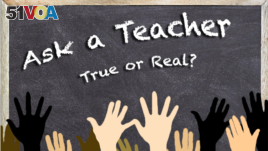 Hello and thanks for asking this useful question.

I am an English teacher. But when I study other languages, sometimes I also confuse these two adjectives.

In English, "true" and "real" have clear differences. Let's start with "true."

"True" means something is factually correct. Knowing its opposite is helpful. The opposite of true is false, or incorrect.

Take this as an example: "Did you know that flamingo birds feed their babies with a red liquid called ‘crop milk'? It's true." That means it is factual.

"Real" means actually existing or happening. The opposite of real is fictional or imaginary.

Take this sentence as an example: "I just learned that narwhals are real animals." That means that they are not imaginary creatures. They actually exist.

"Real" can also mean authentic. For example, if someone says, "This jewel is real," they are saying the stone is authentic.

Now let's talk about adverbs. When "true" and "real" take adverb form, some English learners may be unsure which to choose. The good news is that, as adverbs, both of these words often mean something like "very."

Note that "really" is more common than "truly" in spoken English.

Alice Bryant wrote this lesson for Learning English. Ashley Thompson was the editor.

confuse - v. to make someone uncertain or unable to understand something

fictional - adj. of or relating to something that is invented by the imagination

narwhal - n. a medium-sized whale that has a large "tusk" from a protruding canine tooth

authentic - n. not copied or fake