< Trillions of Cicadas Coming after 17 Years Underground
Update Required To play the media you will need to either update your browser to a recent version or update your Flash plugin.
By Anna Matteo
17 May 2021

Every 17 years, billions of insects, known as the cicadas of Brood X, rise from the earth. This year, perhaps, there will be trillions!

Different broods, or groups, of cicadas come out on different years. The last time Brood X appeared was in 2004. The brood is one of the largest and will appear sometime in May in 15 states, from Georgia in the south to New York in the northeast.

Many scientists and insect lovers say they are looking forward to the red-eyed insects after a 17-year wait. One of them is Mike Raupp, an insect expert at the University of Maryland. 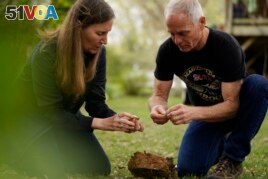 University of Maryland entomologists Michael Raupp and Paula Shrewsbury sift through a shovel of dirt to pick out cicada nymphs in a suburban backyard in Columbia, Md., Tuesday, April 13, 2021. (Carolyn Kaster)

"What they're waiting for is the soil temperatures to reach about 18 degrees Celsius, I believe that's about 64 degrees Fahrenheit. Then they're going to be up and out of the ground."

Raupp called the event a "party on the treetops." When the insects come out of the ground, they will drop their skin, get their wings, and will try to go up on the treetops to escape from the predators.

Raupp told VOA every creature will want to eat a cicada, and they will!

"On that night of emergence when the cicadas come up from the earth, everything on the planet is going to want to eat a cicada."

Once on the treetops, the male cicadas will "sing" their mating songs to draw the females. And it is loud!

If she likes the singing, they will have sex and reproduce. About six weeks later, the nymphs will fall off the treetops and go into the ground. Underfoot, the insects will quietly feed off tree roots and wait for another 17 years to start the party on the treetops all over again.

"I think the periodical cicadas give tens of millions of people an opportunity to simply go out in their backyard and witness and enjoy a natural event that happens nowhere else on the planet, only a handful of times in a lifetime."

Raup explained that some cicadas appear every year. But they have a much shorter life cycle and stay alive in two ways. They are green and can hide in nature. Also, they can fly very fast. So, they avoid being captured by predators.

Periodical cicadas like Brood X do not have either of those lifesaving methods. To continue the species, he said billions of periodical cicadas will appear all at the same time. So, their predators cannot eat all of them. Also, by coming out every 17 years, they are not a dependable food source for predators and simply outlive them.

Some people might be afraid of Brood X or concerned about the noise. Raupp advised it may help to think of the similarities between Brood X and people.

"You know, this past year for humans has been a year of many challenges, right? We've had COVID. We've had social unrest. But now with the vaccines, with restrictions being lifted, people are getting outside again. There's no longer social distancing. They're having fun with their friends. Now, think about the cicadas. They've been underground for 17 years social distancing. They're not hanging out together. And just like us, this spring in May, they're coming up and out of the ground. They're going to go to the treetops. They're going to have fun."

For those feeling even braver, a student at the University of Maryland, Jenna Jadin, wrote a book in 2004 to give cooking directions for eating cicadas.

In Cicada-Licious: Cooking and Enjoying Periodical Cicadas, she suggests eating only newly-emerged cicadas whose outer bodies have not hardened. Boil them for about four to five minutes. Remove the hard parts -- the wings and the legs. They will not hurt you, she writes. But they are not that tasty. Then you can fry them in seasonings.

Raupp and other experts warn that people should talk to their doctor before eating any insect. He also suggests that those people who are afraid of cicadas think of them this way.

"Yes. I think everybody feels that it's a new day. It's a new day for us. It's certainly going to be a new and wonderful day for cicadas. So, I think we have a lot to look forward to."

Anna Matteo wrote this story for VOA Learning English. Hai Do was the editor.

backyard – n. an area at the rear of a house

emergence – n. the act of becoming known or coming into view emerge – v. to come out or into view :

nymph – n. technical : a young insect that has almost the same form as the adult

life cycle – n. the series of stages in form and functional activity through which an organism passes between successive recurrences of a specified primary stage

species – n. a particular group of things or people that belong together or have some shared quality

challenge – n. a difficult task or problem : something that is hard to do

seasoning – n. a substance (such as salt, pepper, a spice, or an herb) that is used to add flavor to food