< Tobacco Is Profitable in Zimbabwe, But Growers Speak of Debt
Update Required To play the media you will need to either update your browser to a recent version or update your Flash plugin.
By Gregory Stachel
27 May 2021


Zimbabwean farmers are again growing tobacco. But some say it is lenders who are profiting by placing farmers in debt.

Rosemary Dzodza is a small farmer who recently traveled 200 kilometers to the capital, Harare. She brought her tobacco crop for what she hoped would be a profitable day.

But the 60-year-old farmer ended up sleeping out in the open for two weeks waiting for her payment. When the money arrived, it was just a small part of what her tobacco sold for later.

She was angry. "My tobacco sold for $7,000, but I am only going home with less than $400," she said. The rest of the money went to the merchant who had given her a loan to pay for fertilizer, seed, labor, firewood and goods for her home. 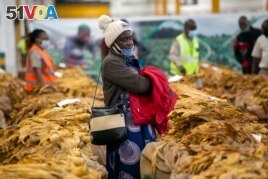 A tobacco grower waits patiently for her tobacco crop to be sold at the auction floor in Harare, Thursday, April 8, 2021.

Dzodza had to repay the loan with interest and sell her crop to the merchant at a set price. The merchant then sold the tobacco to the highest bidder in a public sale. Often, the highest price is paid by buyers who will export the crop to China.

Tobacco was a profitable crop in Zimbabwe for more than 60 years. White farmers profited during this time. When former President Robert Mugabe's supporters began violently taking over white-owned farms, tobacco production fell. The tobacco crop dropped from 260 million kilograms in 1998 to 50 million kilograms in 2008.

Since then, tobacco production by Black farmers has grown. The number of Black growers, mainly on small farms, has risen to more than 145,000. Experts estimate that this year's tobacco crop will be 200 million kilograms. That is up from 180 million kilograms last year.

Zimbabwe's banks used to give loans to white farmers for tobacco growing. But the banks pulled out years ago because the government has not provided deeds to the Black farmers on formerly white-owned land. Deeds are documents that show ownership of land or property.

The merchant loans helped Black farmers get involved in the tobacco industry. The demand started with Chinese buyers. But now many Zimbabwean merchants want to profit from it.

The Tobacco Market Industry Board supervises the tobacco industry in Zimbabwe. It says 96 percent of tobacco farmers have been financed by the loan contracts. This year, the Tobacco Industry Marketing Board released 20,000 farmers from contracts with merchants.

Many say this system has helped Zimbabwe bring the tobacco industry back to life and become Africa's biggest grower of the crop. But many Black farmers say the merchants are making them poor.

George Seremwe is the president of the Tobacco Association of Zimbabwe. He said that farmers are always in debt because as soon as they repay a loan, they have to take out another one. "Year in and year out they are in debt," he said.

He said that some farmers lose animals, their only wealth, to merchants after failing to repay loans because of poor harvests.

A study in the publication Tobacco Control found that more than 90 percent of tobacco farmers want to end their contracts but cannot find other ways to raise money. The study found that close to 60 percent of farmers said they were in debt.

Economist John Robertson said the problem is that farmers who took over white-owned land are not able to borrow from banks. He said banks fear that, if a farmer fails to repay a loan, they cannot sell the farmer's land to cover the cost because ownership of the land is unclear.

The government says the answer lies with the state-owned Land Bank started in April. It says the bank would loan farmers money for their tobacco crops at lower interest rates.

Not everyone is sure it will work. Farmers such as Dzodza say they may have to continue with contract farming.

Farai Mutsaka reported this story for the Associated Press. Gregory Stachel adapted it for VOA Learning English. Mario Ritter, Jr. was the editor.

merchant – n. someone who buys and sells goods especially in large amounts

bidder –n. a person who offers to pay a set price for something being sold in a public sale (usually the object is sold to the bidder offering the highest price)

deed – n. a legal document that shows who owns a building or piece of land