< 'To Build a Fire,' by Jack London
Update Required To play the media you will need to either update your browser to a recent version or update your Flash plugin.
By VOA
19 March 2021


Our story today is called "To Build a Fire." It was written by Jack London and adapted by Dona de Sanctis. Here is Harry Monroe with the story.

**Editor's note: The towns named in this story are in Canada's Yukon Territory. At the time this story was published, the United States owned Alaska, but it was not yet a state. Alaska became a state on January 3, 1959.

The man walked down the trail on a cold, gray day. Pure white snow and ice covered the Earth for as far as he could see. This was his first winter in Alaska. He was wearing heavy clothes and fur boots. But he still felt cold and uncomfortable. 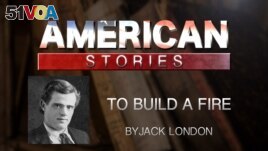 To Build A Fire by Jack London

A dog walked behind the man. It was a big gray animal, half dog and half wolf. The dog did not like the extreme cold. It knew the weather was too cold to travel.

The man continued to walk down the trail. He came to a frozen stream called Indian Creek. He began to walk on the snow-covered ice. It was a trail that would lead him straight to Henderson Creek and his friends.

As he walked, he looked carefully at the ice in front of him. Once, he stopped suddenly, and then walked around a part of the frozen stream. He saw that an underground spring flowed under the ice at that spot. It made the ice thin. If he stepped there, he might break through the ice into a pool of water. To get his boots wet in such cold weather might kill him. His feet would turn to ice quickly. He could freeze to death.

At about twelve o'clock, the man decided to stop to eat his lunch. He took off the glove on his right hand. He opened his jacket and shirt, and pulled out his bread and meat. This took less than twenty seconds. Yet, his fingers began to freeze.

He hit his hand against his leg several times until he felt a sharp pain. Then he quickly put his glove on his hand. He made a fire, beginning with small pieces of wood and adding larger ones. He sat on a snow-covered log and ate his lunch. He enjoyed the warm fire for a few minutes. Then he stood up and started walking on the frozen stream again.

A half hour later, it happened. At a place where the snow seemed very solid, the ice broke. The man's feet sank into the water. It was not deep, but his legs got wet to the knees. The man was angry. The accident would delay his arrival at the camp. He would have to build a fire now to dry his clothes and boots.

He walked over to some small trees. They were covered with snow. In their branches were pieces of dry grass and wood left by flood waters earlier in the year. He put several large pieces of wood on the snow, under one of the trees. On top of the wood, he put some grass and dry branches. He pulled off his gloves, took out his matches, and lighted the fire. He fed the young flame with more wood. As the fire grew stronger, he gave it larger pieces of wood.

He worked slowly and carefully. At sixty degrees below zero, a man with wet feet must not fail in his first attempt to build a fire. While he was walking, his blood had kept all parts of his body warm. Now that he had stopped, cold was forcing his blood to withdraw deeper into his body. His wet feet had frozen. He could not feel his fingers. His nose was frozen, too. The skin all over his body felt cold.

Now, however, his fire was beginning to burn more strongly. He was safe. He sat under the tree and thought of the old men in Fairbanks. The old men had told him that no man should travel alone in the Yukon when the temperature is sixty degrees below zero. Yet here he was. He had had an accident. He was alone. And he had saved himself. He had built a fire.

Those old men were weak, he thought. A real man could travel alone. If a man stayed calm, he would be all right. The man's boots were covered with ice. The strings on his boots were as hard as steel. He would have to cut them with his knife.

He leaned back against the tree to take out his knife. Suddenly, without warning, a heavy mass of snow dropped down. His movement had shaken the young tree only a tiny bit. But it was enough to cause the branches of the tree to drop their heavy load. The man was shocked. He sat and looked at the place where the fire had been.

The old men had been right, he thought. If he had another man with him, he would not be in any danger now. The other man could build the fire. Well, it was up to him to build the fire again. This time, he must not fail.

The man collected more wood. He reached into his pocket for the matches. But his fingers were frozen. He could not hold them. He began to hit his hands with all his force against his legs.

After a while, feeling came back to his fingers. The man reached again into his pocket for the matches. But the tremendous cold quickly drove the life out of his fingers. All the matches fell onto the snow. He tried to pick one up, but failed.

The man pulled on his glove and again beat his hand against his leg. Then he took the gloves off both hands and picked up all the matches. He gathered them together. Holding them with both hands, he scratched the matches along his leg. They immediately caught fire.

The man looked up. The dog was still watching him. The man got an idea. He would kill the dog and bury his hands inside its warm body. When the feeling came back to his fingers, he could build another fire. He called to the dog. The dog heard danger in the man's voice. It backed away.

The man called again. This time the dog came closer. The man reached for his knife. But he had forgotten that he could not bend his fingers. He could not kill the dog, because he could not hold his knife.

The fear of death came over the man. He jumped up and began to run. The running began to make him feel better. Maybe running would make his feet warm. If he ran far enough, he would reach his friends at Henderson Creek. They would take care of him.

It felt strange to run and not feel his feet when they hit the ground. He fell several times. He decided to rest a while. As he lay in the snow, he noticed that he was not shaking. He could not feel his nose or fingers or feet. Yet, he was feeling quite warm and comfortable. He realized he was going to die.

Well, he decided, he might as well take it like a man. There were worse ways to die.

The man closed his eyes and floated into the most comfortable sleep he had ever known.

The dog sat facing him, waiting. Finally, the dog moved closer to the man and caught the smell of death. The animal threw back its head. It let out a long, soft cry to the cold stars in the black sky.

And then it turned and ran toward Henderson Creek...where it knew there was food and a fire.

We want to hear from you. Have you ever been in a dangerous situation in nature? How were you able to survive? Let us know in the comments section.

creek - n. a place where a small amount of water flows

glove - n. a covering for the hand that has separate parts for each finger

withdraw - v. to take something back, away or out